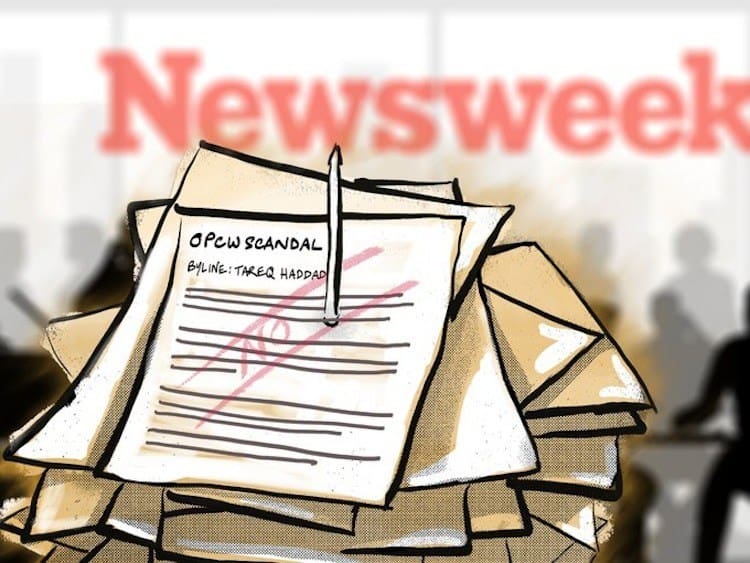 (Tareq Haddad) has resigned after the publication reportedly suppressed his story about the ever-growing OPCW scandal, the revelation of immensely significant plot holes in the establishment Syria narrative that you can update yourself on by watching this short seven-minute video or this more detailed video here. “Yesterday I resigned from Newsweek after my attempts to publish newsworthy revelations about the leaked OPCW letter were refused for no valid reason,” Newsweek journalist Tareq Haddad reported today via Twitter.

“I have collected evidence of how they suppressed the story in addition to evidence from another case where info inconvenient to US government was removed, though it was factually correct,” Haddad said. “I plan on publishing these details in full shortly. However, after asking my editors for comment, as is journalistic practice, I received an email reminding me of confidentiality clauses in my contract. I.e. I was threatened with legal action.”

Yesterday I resigned from Newsweek after my attempts to publish newsworthy revelations about the leaked OPCW letter were refused for no valid reason.

Newsweek Journalist Threatened with Legal Action for Telling the Truth

Haddad added that he is now seeking legal advice and looking into the possibility of whistleblower protections for himself, and said at the very least he will publish the information he has while omitting anything that could subject him to legal retaliation from his former employer.

“I could have kept silent and kept my job, but I would not have been able to continue with a clean conscience,” Haddad said. “I will have some instability now but the truth is more important.”

This is the first direct insider report we’re getting on the mass media’s conspiracy of silence on the OPCW scandal that I wrote about just the other day. In how many other newsrooms is this exact same sort of suppression happening, including threats of legal action, to journalists who don’t have the courage or ability to leave and speak out? There is no logical reason to assume that Haddad is the only one encountering such roadblocks from mass media editors; he’s just the only one going public about it.

Newsweek has long been a reliable guard dog and attack dog for the US-centralized empire, with examples of stories that its editors did permit to go to print including an article by an actual, current military intelligence officer explaining why US prosecution of Julian Assange is a good thing, fawning puff pieces on the White Helmets, and despicable smear jobs on Tulsi Gabbard. The outlet will occasionally print oppositional-looking articles like this one by Ian Wilkie questioning the establishment Syria narrative, but not without immediately turning around and publishing an attack on Wilkie’s piece by Eliot Higgins, a former Atlantic Council Senior Fellow who is the cofounder of the NED-funded imperial narrative management firm Bellingcat. Newsweek also recently published an article attacking Tucker Carlson for publicizing the OPCW scandal, basing its criticisms on a bogus Bellingcat article I debunked shortly after its publication.

Mainstream media doesn’t think the leaks are newsworthy indicating that the US, France and UK bombed Syria last year in retaliation for a chemical weapons attack which according to the official scientists who invested it maybe never occurred. https://t.co/CRnL9Ejatw

The ubiquitous propagandistic tactic of fake news by omission distorts the public’s worldview just as much as it would if mass media outlets were publishing bogus stories whole cloth every day, only if they were doing that it would be much easier to pin them down on their lies, hold them accountable, and discredit them.

A recent FAIR article by Alan MacLeod documents how the Hong Kong demonstrations are pushed front and center in mainstream consciousness despite the fact that to this day not one protester has been killed by security forces, while far more deadly violence is being directed at huge protests in empire-aligned nations like Haiti, Chile and Ecuador which have been almost completely ignored by these same outlets. This deliberate omission causes a distorted worldview in casual and mainstream news media consumers in which protests are only happening in nations that are outside the US-centralized power alliance. We see the same kind of deliberate distortion-by-omission with the way mass media continually pushes the narrative that Donald Trump is “soft on Russia”, while remaining completely silent on the overwhelming mountain of evidence to the contrary.

The time is now for everyone with a platform to start banging the drum about the OPCW scandal, because we’re seeing more and more signs that the deluge of leaks hemorrhaging from that organisation is only going to increase. Mainstream propagandists aren’t going to cover it, so if larger alternative media outlets want to avoid being lumped in with them and discredited in the same sweep it would be wise to start talking about this thing today. It’s only going to get more and more awkward for everyone who chose to remain silent, and more and more validating for those who spoke out.