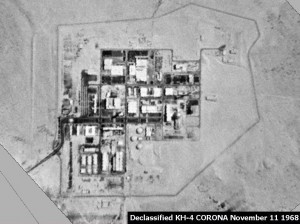 This is a declassified photo of a Nuclear Reactor in Dimona, Israel where nuclear weapons are being made and stored

located at their nuclear reactor base in Dimona. Although both Israel and the US have adopted official policies of neither confirming nor denying its existence, there have been enough revelations and mounting intelligence over the years to confirm it. Ever since 1945 with the dropping of 2 atomic bombs on Japan, the world at large has been rightly concerned with the lethality of atomic weapons and worried that they fall into the wrong hands. Well, look no further. The current Israeli administration of Netenyahu and Lieberman are war hawks who are itching to pull the trigger on Iran. Why is the world so concerned about Iran getting nuclear weapons when we already know that Israel has nuclear weapons … and is being led by racist maniacs who could take us into WWIII?

Zionist Israel has such a grip on the United States, Britain, Canada and many other major countries (especially through organizations like AIPAC in the US) that it is incredibly rare for a politician to speak out against Israel. This is because Israel is essentially a country completely owned and controlled by the Rothschilds (who own 80% of the land there), the richest and most powerful family in the world. The cozy relationship between the US and Israel is not in America’s best interests. Here is an excerpt from George Washington’s Farewell Address:

“A passionate attachment of one nation for another produces a variety of evils. Sympathy for the favorite nation, facilitating the illusion of an imaginary common interest in cases where no real common interest exists, and infusing into one the enmities of the other, betrays the former into a participation in the quarrels and wars of the latter without adequate inducement or justification.”