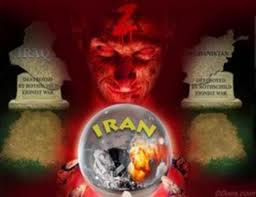 Iran is being targeted by forces controlling Israel and the US. Both the CIA and IAEA have stated there is no proof Iranian has nuclear weapons or intends to make them.

The parallels between the two are strikingly obvious. In each case, the Zionist dominated mainstream media in the West (esp. the US and Britain) are demonizing a sovereign nation, painting their citizens as terrorists and their leaders as madmen who hate the US. Not only is the consolidated mainstream media stretching and exaggerating reality, it is also fabricating it. With Iraq, the catch phrase was “WMD” or weapons of mass destruction. With Iran, the constantly repeated idea is that “Iran has nuclear weapons.”

Iran Iraq same lie. The tactic being used is reminiscent of a quote attributed to Hitler, that if you lie big enough, often enough, the people will eventually believe it. Iraq never had any weapons of mass destruction, despite Colin Powell’s lies at the UN. Iran, likewise, doesn’t have any nuclear weapons, and the US and Israel have not produced any evidence that it has.

Western governments have been practicing the art of “PR” (public relations), which is really just a code phrase for propaganda, for decades now. They are expert at “Manufacturing Consent” and molding public opinion to suit their needs. One way they work is by creating a key phrase (e.g. weapons of mass destruction) and then getting all the top politicians, media reporters and analysts on their payroll to incessantly repeat it. The mass public, unaware of how interconnected and consolidated the media and power really is, think that if all these different sources are saying it, it must be true – or at the very least, it subconsciously adds credibility to the lie. In the case of Iraq, there never were any WMDs. The entire thing was invented out of thin air!

Iraq Iran same lie. How many are going to fall for it this time? The price for buying into such deception is very steep. Over 1 million Iraqis are dead and countless innocent children are mutated by DU (depleted uranium) weapons due to the invasion beginning 2003. Let’s not make the same mistake again.

Previous Article
Sovereignty: We Get the Government We Deserve
Next Article
The Fake War on Terror: An Endless War Against a Faceless Enemy