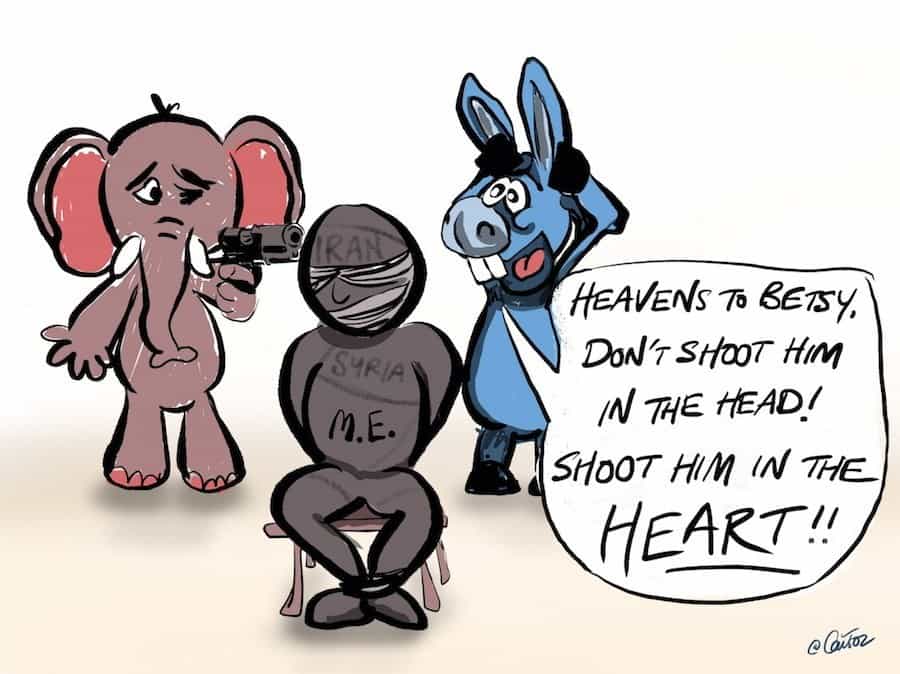 There is an idiotic partisan debate over whether (US-Zionist) regime change should take place in Iran or Syria – but it’s one and the same agenda.

There is an idiotic partisan debate

occurring right now over whether there should be regime change in Iran or Syria. I love my job. Really, I do. But writing about US military agendas for a living often brings one into contact with such staggering stupidity that all you can do is pause and wonder how our species survived past the invention of the pointy stick. By far the dumbest thing in all of US politics is the fact that Democrats tend to support regime change in Syria, while Republicans tend to support it more in Iran. I am not talking about the elected officials in those parties; I’m talking about the ordinary rank-and-file Joes and Janets who stand absolutely nothing to gain from toppling either Damascus or Tehran, but who have been brainwashed by lifelong media consumption into supporting one or the other anyway.

At no time has this ever failed to occur.

I’ve spent the last few days arguing with Trump supporters who are telling me I’m crazy for not celebrating the death of an Iranian general they had no idea existed one week ago, and many of these pro bono State Department propagandists began following my work because they liked what I’ve been saying about Syria.

Conversely, all the fauxgressives and liberal interventionists who spent all last month telling me I’m a monster for writing about leaked OPCW documents showing we were lied to about an alleged 2018 chemical weapons incident have been staying out of my social media notifications completely these past four days.

It is truly bizarre. And it is truly, deeply, profoundly stupid.

Syria and Iran are allies. Eliminating one government necessarily hurts the other. Iran has been helping Syria to win the war against foreign-backed extremist proxy fighters who nearly succeeded in toppling Damascus before its allies stepped in, and should Syria succeed in rebuilding itself (something the Trump administration is actively preventing it from doing) we can be sure it would return the favor when called upon.

The US government’s agenda to “take out” all noncompliant governments in the Middle East is completely removed from any consideration for American party politics. It’s one unified agenda, and the more the imperial blob succeeds in weakening any of the remaining unabsorbed nations, the easier it gets to absorb the others.

Supporting regime change in Iran but not Syria, or vice-versa, is for this reason an inherently absurd position to take. If you opposed Obama’s attempt to topple Damascus via Timber Sycamore-armed proxies, it’s absurd for you to support any maneuvers which could lead to the elimination of Syria’s key ally in that fight. If you oppose Trump’s current warmongering toward Iran, it’s absurd for you to support the elimination of one of Iran’s remaining friends in the region.

If Iran falls you may be sure that Syria will fall next, and vice versa. It’s the same box being ticked; you’re just arguing over whether it should be a left-handed or right-handed check mark.

In a sense it’s quite brilliant; we may be quite sure that government agency departments responsible for domestic perception management on US foreign policy have discussed this precise dynamic at length. But in another sense it’s quite mundane: the recent Republican presidents have pursued regime change in Iran, while Obama pursued it in Syria, so Republicans support Republican interventions while Democrats support Democratic ones.

This has nothing to do with any substantial difference in these agendas (again, it’s actually one agenda) and everything to do with what each faction can be more easily propagandized toward. Liberal hearts are easier to grab with horror stories about a monster who gasses babies for no reason and less concerned about refugee crises and the persecution of Syrian Christians, while Republicans are much easier to manipulate into despising a theocracy run by Muslims.

And of course there’s overlap; people who prioritize mass murder above all else like John Bolton and Lindsey Graham will cheer enthusiastically for as much military interventionism as they can get in either country (or any country, really). But by and large, especially among the rank-and-file, people tend to support the interventions their respective presidents propagandized them into supporting. Propaganda is pretty much the only thing the presidential “bully pulpit” is used for.

Because Iraq has poisoned the idea, each mainstream faction may deny actually wanting the US to oust the government of Iran or Syria. Trump supporters who still stand by the anti-interventionist platform he falsely campaigned on may say “I don’t want war with Iran, I just want Iranians to get their freedom and I think it’s awesome they killed Solamumi or however you spell it.” Liberals might say “I don’t want interventionism! I just support the Freedom Fighters™️ in Idlib and want Assad to stop murdering civilians for fun and sexual gratification.” But circulating propaganda narratives about governments targeted for regime change is supporting regime change. You’re participating in it as surely as if you’d deployed the Tomahawk missiles yourself.

Now we’re being told that none of the millions of people publicly mourning Soleimani do so voluntarily and they all secretly like the fact that America assassinated their country’s top military commander who defended Iran and just defeated ISIS. The propaganda is getting dumber.

Yesterday someone told me that everyone at Qassem Soleimani’s incredibly massive funeral procession was attending because they were forced to. When I asked him if he was claiming that every single one of those millions of people were publicly mourning because they’d been literally forced at gunpoint, he told me no: many were forced in the sense that state propaganda was all they’d ever known, so they were psychologically coerced into grieving Soleimani.

“I don’t accept that your ‘state propaganda their whole lives’ model is any more coercive or fascistic than the kind that causes Americans to turn up to pro- and anti-Trump rallies,” I said. “Americans are no less propagandized than Iranians. If anything it’s worse, since Americans don’t know they’re being propagandized.”

“You’ve got it backwards,” he said. “Iranians don’t know they’re being propagandized because they only have one source of information. The U.S. knows it because we have sides screaming it to other sides all the time and the freedom of information and thought to come to our own conclusions.”

“Nonsense,” I replied. “Nearly all Americans are propagandized to the gills. They’re probably the most aggressively propagandized population on earth, just because so much depends on their swallowing propaganda. It’s just a more scientific sort.”

“And yet here we are, talking about it freely without worrying about swallowing a bullet,” he said.

The greatest asset of the propagandists is the belief that we haven’t been propagandized.

Previous Article
Destroying the Culture of Others, That’s What Neocons Do
Next Article
Surprise, Iraqi Resistance Bombs Green Zone!