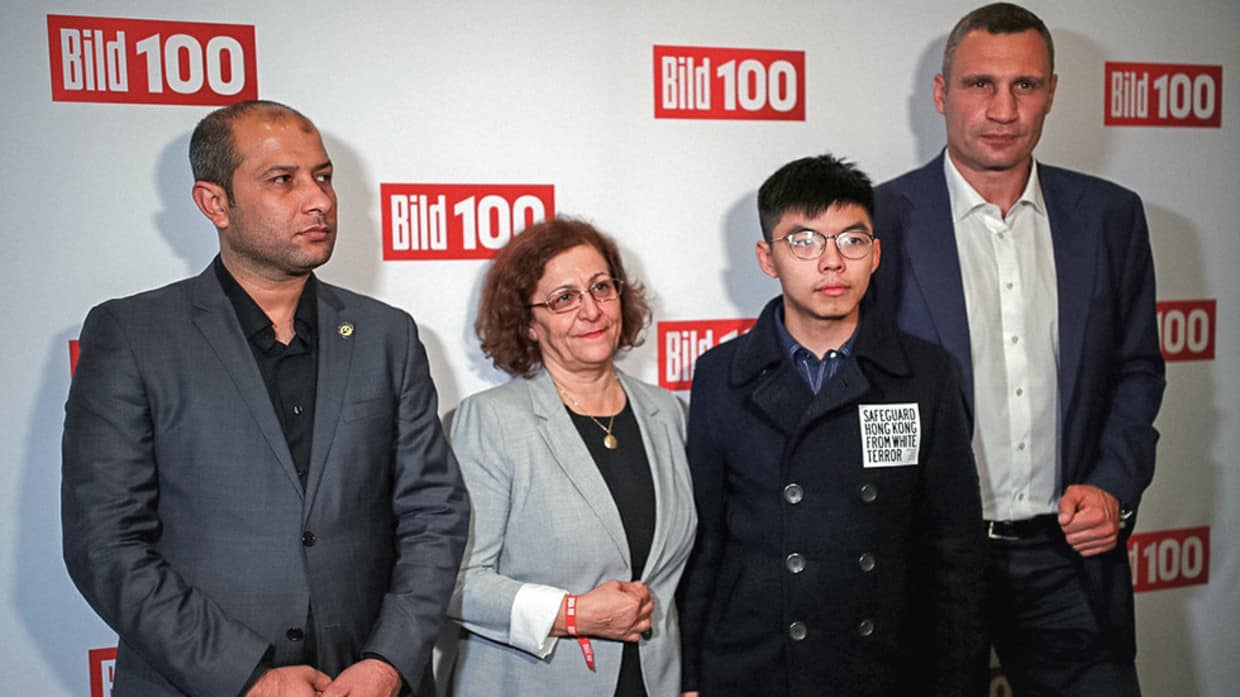 Joshua Wong has recently been doing some flyin’ around and hobnobbing with the rich, famous and powerful. He went to Berlin and met with German Chancellor Angela Merkel and other ‘pro-democracy’ figures like Mayor of Kiev Vitaly Klitschko, who was for awhile himself a Western favorite when the US was actively involved in the color revolution in Ukraine. While there, Wong met with Raed Al Saleh, the head of the White Helmets. For those who don’t know, the White Helmets are a Western propaganda construct with close links to terrorist groups such as Al Qaeda and Jahbat Al Nusra  (now known as Tahrir Al Sham). What would a supposedly organic grassroots movement leader in China have in common with a Syrian war organization? On the surface, nothing; under the surface, everything; they are both propaganda and destabilization tools of Western (US-UK) foreign meddling and interference.

The White Helmets paraded around like heroes pretending to be the saviors of the Syrian people during the earlier years of the Syrian War (which is still ongoing). Appropriately, they were the stars of a TV documentary which won Oscars. Oscars are awarded for acting – and that’s all it really was, acting. The White Helmets were founded in 2013 by James Le Mesurier, a British ex-mercenary and intelligence agent. True independent journalists such as Vanessa Beeley exposed how the White Helmets were a front for various groups of US-UK-Israeli funded rebel terrorists, who were fighting the legitimately elected president of Syria, Bashar Al Assad. In videos like this and this, Beeley walks through an abandoned White Helmets center in Sakhour, East Aleppo … right next door (20 meters) from the Al Nusra Front Aleppo headquarters. In fact, both centers had various entrances to each other and the only thing dividing them is a playground wall. Beeley noted:

“On the 30th April 2017 we visited the abandoned White Helmet centre in Sakhour, East Aleppo. This was the biggest, and most publicized White Helmet centre in East Aleppo. Paperwork left behind proves that various US, UK, EU countries were supplying the group … The White Helmets, as we know, are exclusively embedded in Nusra Front, ISIS & other extremist controlled areas … that contain maximum 20% of the Syrian population, many of whom are living under enforced starvation, deprivation, lack of medical care, imprisonment, torture, execution, rape … at the hands of the extremist factions that the White Helmets support and assist.” 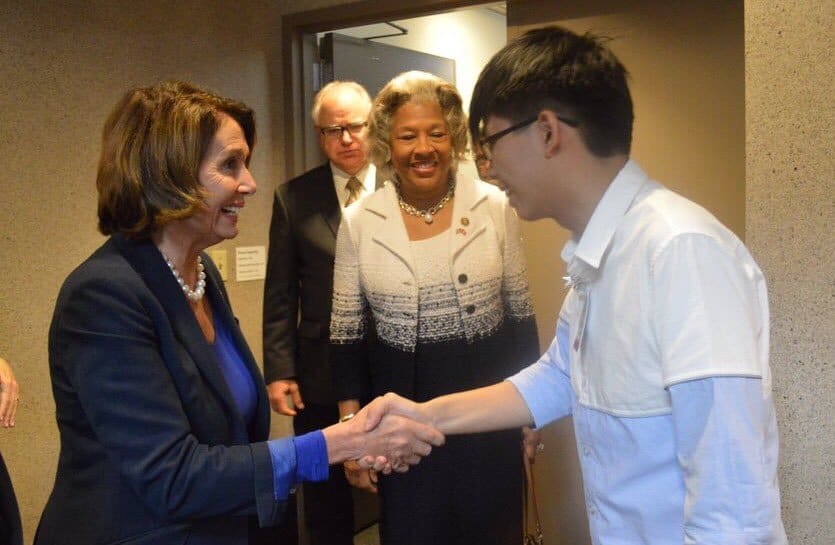 If Joshua Wong is trying to paint himself as a leader of a grassroots movement, he’s doing the worst job possible. The evidence is overwhelming that he’s just another pawn of US foreign policy and regime change efforts, led by notorious NGOs like the NED (National Endowment for Democracy) of George Soros. This is the case even if a large segment of the Hong Kong protestors are grassroots activists and ordinary people. As mentioned in articles like Taunting the Dragon: Background to US-China Trade War & Hong Kong Protests, Wong was caught meeting with senior US official Julie Eadah from the USA’s Hong Kong consulate. He has also met with Nancy Pelosi (right) in the past.

Not surprisingly, if you’re following the thread by now, he even met with devoted war hawk, neocon and Venezuelan coup-plotter Marco Rubio. I highlighted Rubio’s role in the US coup against Venezuela earlier this year in 2019. I also mentioned in the above-linked Taunting the Dragon article that Rubio had been drafting legislation to forge a split in China between Beijing and the Uyghur minority group. Why on Earth would Wong be associating with Rubio, unless it was precisely because he was getting tuition and instructions on how to split Hong Kong away from China, thus causing Beijing the maximum amount of difficulty as possible? 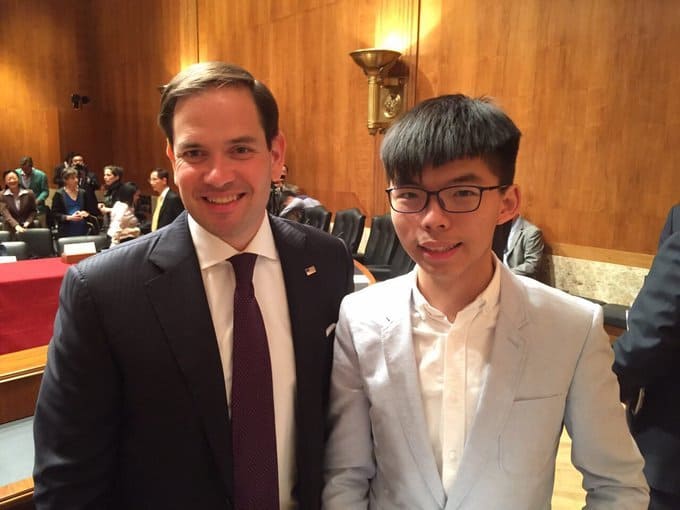 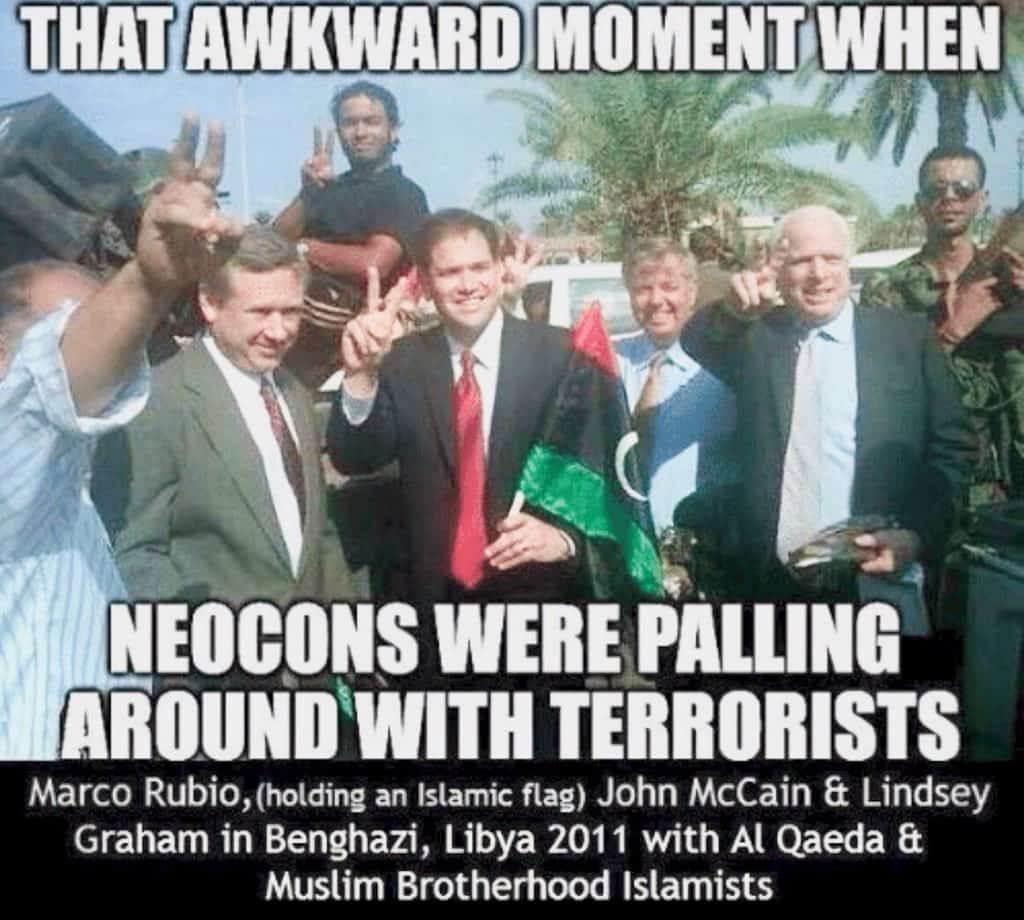 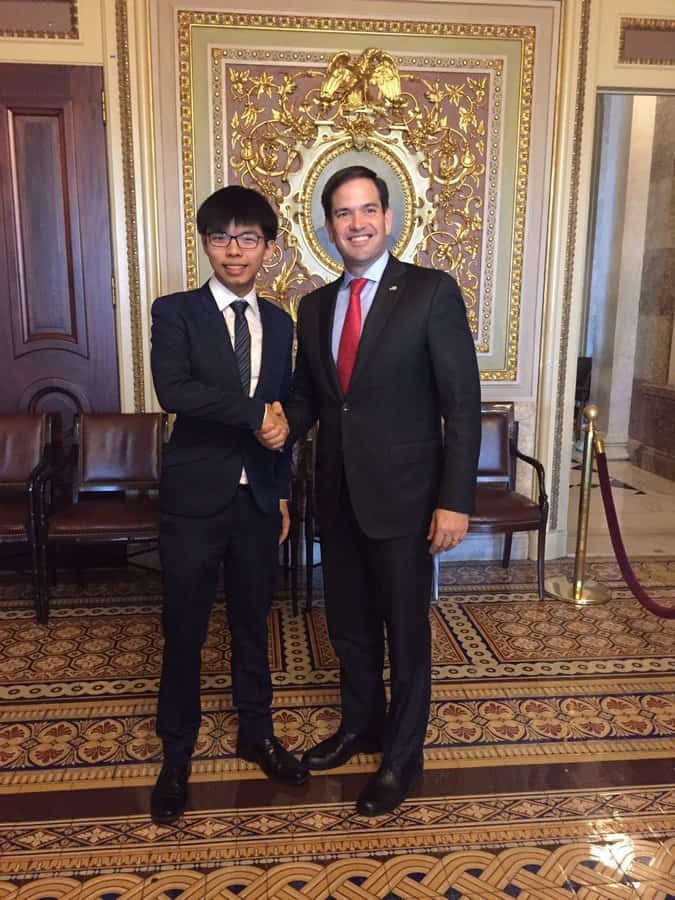 Wong is again pictured with Rubio (left). Rubio’s coup-plotting is by no means limited to Venezuela and China. He used to follow the late war hawk John McCain on his tours to the Middle East to meet up with their good terrorist friends (see far left).

Hong Kong Protests: Begging for US Intervention and ‘Liberation’?

As brutal and authoritarian as the Chinese Government can be to its own people, one has to wonder what the Hong Kong protestors are thinking when they are holding up signs asking President Trump to “liberate them”? Talk about jumping out of the fire and into the frying pan. What do they want – the US to attack China and annex Hong Kong? Do they somehow think that Beijing will fold under pressure from the US-China Trade War and just let the US intervene in Hong Kong without consequences? According to RT, here’s what happened at recent protest rally on September 8th 2019:

“Hong Kong protesters rallied in their thousands and clashed with police in fresh unrest. They even called on Washington to “liberate” them from Chinese rule, suggesting some may now view the US as their patron. Thousands of demonstrators marched to the US Consulate in Hong Kong on Sunday, in what they said was an appeal to President Donald Trump to intervene in the weeks-long political turmoil. Videos of the rally show protesters waving American flags as they sing the US national anthem and play ‘The Star Spangled Banner’ through the speakers on their phones.”

US interference has reached the point of such blatancy that the color revolution protestors are actually waving US flags and playing the Star Spangled Banner! Holy cow! Guess it moved on from a weeks ago when they holding up the union jack, the flag of their former colonial rulers, the UK. RT also reported on Hong Kong Protest leader Jimmy Lai and on another Hong Kong Protest leader Martin Lee, more supposedly grassroots’ leaders who just happen to be meeting with Zionist neocon, ex-CIA head and current Secretary of State, Mike Pompeo:

“One of the men at the center of the protest movement is a Hong Kong tycoon, Jimmy Lai, whose company owns one of the most-read local papers, a tabloid called the Apple Daily. Another one is politician and barrister, Martin Lee, the founding chairman of the local Democratic Party. Both men visited Washington at the height of the protests to meet with some high-ranking US officials including State Secretary Mike Pompeo.

And as a former senior adviser in the Trump and Bush administrations Christian Whiton, who met both Lai and Lee in Hong Kong this summer, put it “causing this crisis for the Chinese government … is good in the national interests of the US.””

The Hong Kong protests are now in their 15th week and show no sings of slowing down. With the US gradually moving its focus away from Russia as enemy #1 and onto China as the new enemy #1, you can expect to see more Sinophobia (and less Russophobia). You can expect to see more foreign meddling and interference, more deals with and ‘aid’ to Taiwan, Hong Kong, Macau, the Uyghurs, the Dalai Lama (Tibetans) and any other minority group which could cause friction with the ruling Chinese Communist Party. This is the 21st century, and all of these economic and meddling shenanigans are part of the 21st century new hybrid warfare.