Hockey Stick Climate Change Graph is Evidence-Free! Playing the Mann, not the Ball

Hockey Stick Climate Change Graph is Evidence-Free! Playing the Mann, not the Ball 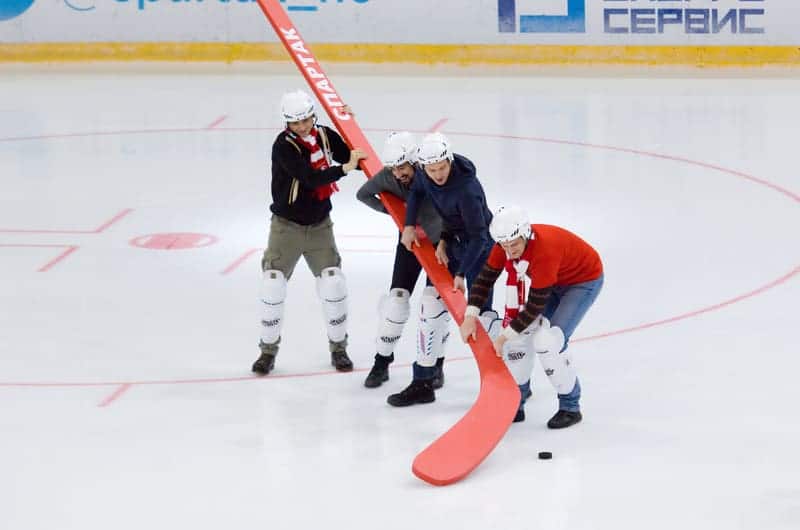 The hockey stick became an infamous term in climate change circles due to Mann’s work, though perhaps now it will become more a symbol of fraud.

has become a well-known term and concept in climate change circles. AGW (Anthropogenic Global Warming) or manmade global warming advocates have often tried to justify climate change alarmism by citing data and pointing to graphs that show an extreme, drastic and historically unprecedented rise in temperature. This rise is depicted on a graph as a sharp, steep upturn that resembles a hockey stick, hence the term. Last week the BC Supreme Court in Canada finally concluded a 9-year long defamation case by dismissing it. The lawsuit was brought forward by climatologist Michael Mann (who has pushed AGW on the public for decades) against retired professor Dr. Tim Ball. Mann failed to produce the evidence and data required in a court of law to justify the hockey stick graph. Mann was also part of the Climategate scandal. The news was broken by climate site WattsUpWithThat.com on August 22nd.

Mann was a Big Part of Climategate

Mann is no stranger to controversy – or fraud. He once falsely claimed he was a Nobel Prize winner. He was heavily involved in the hacked and leaked Climategate emails. To recap, the manmade global warming movement suffered a tremendous blow to its credibility in a 2009 scandal dubbed Climategate. Hackers gained access to the internal emails of the CRU (Climatic Research Unit) of the University of East Anglia in England. They released these communications to the public. The CRU emails were incriminating; the scientists involved discussed using “tricks” in their research to get the results they wanted, debated how to frame and obscure uncertainties in their data, talked about how to “hide the decline” of temperature (and therefore show more of a warming trend by fudging the data), plotted to remove journal editors with whom they disagreed and discussed how to keep dissenting views (anti-AGW articles) out of peer-reviewed journals! Here is a sample email:

Mike,
… I can’t see either of these papers being in the next IPCC report. Kevin and I will keep them out somehow – even if we have to redefine what the peer-review literature is !
Cheers
Phil
[Context: CRU head Phil Jones refers to 2 global warming skeptics, Ross McKitrick and Pat Michaels, whose papers suggested that local urbanization not global CO2 levels were the main cause of warming. Jones was using his position to try to keep the paper out of the IPCC report.]

The result of this fraud translated into UN (United Nations) policy. The BBC reported on Nov. 20th 2009 that researchers at CRU “played a key role” in the UN’s IPCC (Intergovernmental Panel on Climate Change) findings. 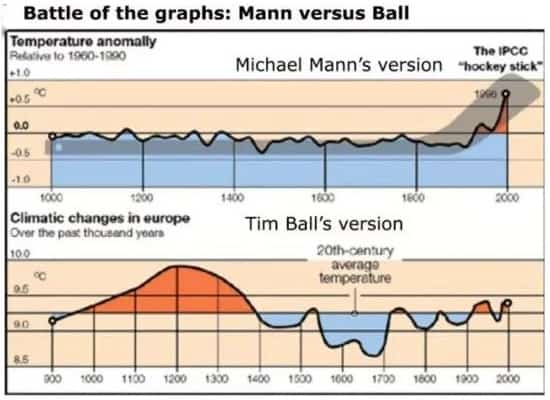 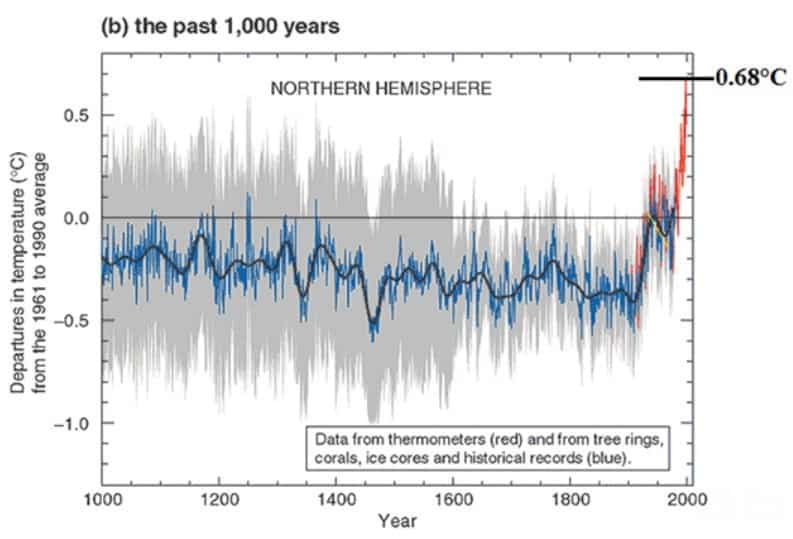 Michael Mann’s hockey stick hyperbole that was used by the UN IPCC.

Mann’s refusal to provide the data (his R2 regression numbers) not only adds to suspicions that his data is fraudulent, but also landed him in contempt of court, as far back as 2 years ago in 2017 when he first refused. When you compare Mann’s and Ball’s graphs above, there are some stark differences. Notice how Mann’s is surprisingly smooth and flat until the end, when there is a sudden uptick (the hockey stick), while Ball’s takes into account both the MWP (Medieval Warm Period, c.950 – c.1250) and the Little Ice Age (c.1400 – c.1750). Mann’s graph looks deliberately engineered to cause alarm and fright by making it appear like we are experiencing in a once-in-a-thousand year temperature spike. This Principia Scientific article is 2 years old but has proved very prescient in predicting the outcome of this case. It refers to a point in the case 2 years ago (when it was still ongoing) when Mann refused to back his hockey stick claims with evidence:

“Mann’s now proven contempt of court means Ball is entitled to have the court serve upon Mann the fullest punishment. Contempt sanctions could reasonably include the judge ruling that Dr. Ball’s statement that Mann “belongs in the state pen, not Penn. State’ is a precise and true statement of fact. This is because under Canada’s unique ‘Truth Defense’, Mann is now proven to have wilfully hidden his data, so the court may rule he hid it because it is fake. As such, the court must then dismiss Mann’s entire libel suit with costs awarded to Ball and his team.”

So what does this mean for the manmade global warming/climate change movement? If the hockey stick graph is exaggerated or fraudulent, what about all the papers and studies that relied on it? This is from Principia Scientific again:

“A bitter and embarrassing defeat for the self-styled ‘Nobel Prize winner’ who acted as if he was the epitome of virtue, this outcome shames not only Michael Mann, but puts the climate science community in crisis. Many hundreds of peer-reviewed papers cite Mann’s work, which is now effectively junked.”

The hockey stick graph was junk science. Now there is both scientific and legal weight to discredit it. perahps teh situation is best summed by this 2003 Canadian study which concluded as follows:

“The data set of proxies of past climate used in Mann, Bradley and Hughes (1998, “MBH98” hereafter) for the estimation of temperatures from 1400 to 1980 contains collation errors, unjustifiable truncation or extrapolation of source data, obsolete data, geographical location errors, incorrect calculation of principal components and other quality control defects …

The particular “hockey stick” shape derived in the MBH98 proxy construction – a temperature index that decreases slightly between the early 15th century and early 20th century and then increases dramatically up to 1980 — is primarily an artefact of poor data handling, obsolete data and incorrect calculation of principal components.”

Conclusion: Better to Play the Ball, not the Mann

Selling the public the idea of AGW is a big plank in the overall plan of Agenda 2030 (formerly Agenda 21). The idea is to convince people that humanity is killing the planet via CO2 emissions (which every single living human being contributes to just by virtue of being alive and breathing) – not by industrial pollution, pharmaceutical contamination of waterways, pesticides, deforestation and GMOs. Nope, the UN and IPCC want people to believe it’s all about CO2 and warming, so they can justify draconian regulations, mass austerity and a global carbon tax. If you want to know more about the NWO (New World Order) bankster background to this, see here for a brief synopsis: Good Hearts, Fooled Minds: Top 4 Fallacies of the Hijacked Environmental Movement.

Perhaps it’s appropriate here to remember that old adage that sports coaches like to say: it’s better to play the Ball not the Mann.