Gun Control: The Cunning Scheme to Disarm the Public

Gun Control: The Cunning Scheme to Disarm the Public 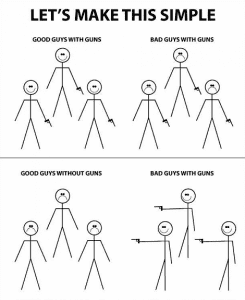 Gun control only serves to centralize power in governmental and criminal hands. It does not make society safer. Ideally we would have a world without guns or violence; but until we get there, we need to respect People’s rights.

Gun control is the stealthy plan to confiscate guns from the public under the pretense of making society safer.

For the record, I don’t own a gun and don’t believe in violence. However, I do believe in liberty, decentralization of power and respecting others’ rights. The idea that gun control will make us safer is deceptive propaganda designed to consolidate even more power (in the form of weaponry) into the hands of the Government. This kind of propaganda is typical of the modus operandi of the NWO (New World Order). The NWO conspirators operate by formulating a certain scheme in the shadows, then by working out how to make it palatable or acceptable to the public, with a lot of sugar-coating, brainwashing and PR (public relations). In fact, the creator of the term “public relations” was Edward Bernays, who was a master of manipulating public opinion. He once said that “the conscious and intelligent manipulation of the organized habits and opinions of the masses is an important element in democratic society. Those who manipulate this unseen mechanism of society constitute an invisible government which is the true ruling power of our country.” Often, the propaganda uses the tactic of fear by scaring us into a fragile emotional state (e.g. with staged terror events like 9/11 and mass shootings) then by appealing to our base need for safety or security. How many times have we heard that We the People must have our rights stripped away, not be allowed to see a classified document or not know the truth, all because of “reasons of national security”?
In the case of gun control in America, the NWO controllers know they cannot come out openly and declare their intention to disarm the public, thereby concentrating guns in the hands of criminals and consolidating power in the hands of Government. It’s completely unlawful, unconstitutional and the people of the US simply wouldn’t stand for it. Gun ownership is entrenched in American culture and enshrined in the US Bill of Rights (the first ten Amendments to the Constitution). It’s the 2nd Amendment to the Constitution. It reads: “A well regulated militia being necessary to the security of a free state, the right of the people to keep and bear arms shall not be infringed.” Some people erroneously believe the right to bear to arms is just for farmers or hunters, however this is not the case; this crucial right serves a much deeper purpose.

The Real Point of the Right to Bear Arms

The purpose of this right is to keep power decentralized, to allow the People to defend themselves and possibly even overthrow their Government if it ever became too tyrannical. Society doesn’t function well if all the power if concentrated with one group of people. Power corrupts, and absolute power corrupts absolutely, as the saying goes. If we want to live in a free and peaceful society, we need to share and distribute the power around as evenly as possible, to prevent any one group (especially a sociopathic, power-hungry or psychopathic group) from grabbing too much power and seizing the reins of control. If we fail to set up and maintain an even distribution of power, society will eventually descend into tyranny, sooner or later.

The Founding Fathers realized this and set things up with many checks and balances to keep power decentralized – not just among the the Executive, Judicial and Legislative branches, but between the Government and People as a whole. Will we maintain this delicate balance, or be tricked into giving away power because we’re scared? Will we fall for the propaganda that giving Government more power will somehow prevent mass shootings? Remember, these mass shootings are a kind of false flag staged terror event. They are orchestrated behind the scenes by a dark cabal who manipulate victims through mind control and psychiatric drugs. This NWO cabal knows it can more easily manipulate public opinion when people are emotional, upset or scared. The Government collecting guns from law-abiding citizens will do nothing to stop these horrific staged events. Remember, these events are being carried out with the sole purpose of confiscating guns from law-abiding citizens!

We need to know the truth about history so we learn what worked and what didn’t. The fact is that Hitler used gun control as a means to disarm his political opponents, and shockingly enough, US gun control legislation precisely resembles the wording used by the Nazis. Don’t be fooled by the gun control debate. There is no debate. The People have the right to bear arms, a right given to us by the Creator, not a privilege given to us by Government. It’s a right that cannot be taken away by legislation. So what are we debating?

Previous Article
Sovereignty and the Way to Overcome Banks, Judges, Bureaucrats and Other So-Called Authorities
Next Article
Federal Income Tax Only Pays Off Debt and Does Not Contribute to Governmental Services for its Citizenry