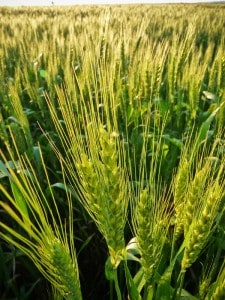 The USDA has found GM wheat contamination in Oregon fields. The GM wheat was unapproved and not supposed to be there – it seems it had come from earlier Monsanto experiments. As a result, Japan has halted some US wheat imports.

GM wheat or genetically modified wheat has just been discovered

in Oregon fields, as reported by the USDA, in what constitutes a serious example of uncontrollable GMO contamination. The GM wheat discovered was not approved by the USDA and was not supposed to be there. However, the thing about GMOs is that there is really no way to stop them spreading once they are planted out in open fields. Apparently the GM wheat spread from GMO field experiments conducted by Monsanto across 16 states from 1998 to 2005.

This is genetic pollution, pure and simple. By allowing GMOs to even be planted in the first place before decades of independent research was carried out, the US Government, along with its bought-out agencies the FDA and USDA (replete with former Monsanto executives), has signed off on the deal to genetically pollute the environment on a grand scale. It has opened up a Pandora’s box, because once GM strains start showing up in supposedly non-GMO fields, it is very difficult (if not impossible) to fully eradicate them.

Genetic contamination of the world is Monsanto’s grand plan

Of course, this is no accident in the deeper sense. It has been the plan all along – the genetic conspiracy. The agenda of Monsanto and other Biotech giants is to take over the world’s seed and food supply (through court-enforced patents on intellectual property), and then take over the human genome itself. According to the warped legal system we have in the US and other Western countries, corporations already “own” various genes, including those in your very own body! Therefore they claim to own your body and own you. Beyond ownership, these corporations (and the dark forces controlling them) want to water down and alter the very genetic structure of humanity, so they can use it to their advantage in consolidating power. Eugenics didn’t die after the Nazis.

This GM wheat contamination in Oregon has some serious consequences for us all. Firstly, litigious Monsanto can now lay claim to all the crops in that field and probably soon the field itself (as it has already done to many small farmers to put them out of business). Secondly, we must now call into question all wheat grown in the US, since there is no longer any guarantee that US wheat is truly pure, organic and non-GMO. Thirdly, other countries opposed to GMOs may stop buying US wheat, which could have a grave effect on US exports. In fact, this has already happened …

Japan, due to GM wheat contamination, halts US wheat imports from Pacific Northwest

In breaking news, the GM wheat contamination has now led Japan to stop some of its US wheat imports, as reported in the Washington Post. According to that article, Japan (one of the largest export markets for US wheat growers) canceled orders of western white wheat from the Pacific Northwest. Many countries around the world will not accept imports of genetically modified foods, and the United States exports about half of its wheat crop.
Tags: