Free Energy: Is the World Ready?

Free Energy: Is the World Ready? 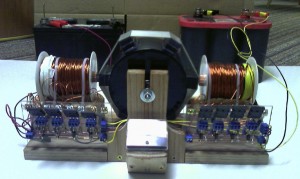 A John Bedini free energy device: one of many types of such technology that could revolutionize the world

The natural state of the universe is plentiful and infinitely abundant. The state of the world on Earth right now is an artificially contrived situation of scarcity, where energy is limited and can be expensive. This has only come about through the determined efforts of the NWO (New World Order) cabal – the ones who control the big oil companies and other forms of energy such as coal and nuclear – in suppressing free energy technology. Geniuses such as Nikola Tesla, Wilhelm Reich, Stan Meyer, Eugene Mallove and many others have produced working prototypes of free energy devices – but they were ridiculed, attacked and in some cases murdered for their efforts. However, there are still many people alive today who promote free energy and even have some of the technology commercialized, such as John Bedini. Free energy can not be suppressed forever – it’s just a matter of time before it becomes cheaply or freely available. The question is: is the world ready?

Mike Adams (NaturalNews.com) wrote in this article that he believes the world is not ready, because our ethical development is not as advanced as our technological development, and we could end up destroying ourselves. While I agree that our technology has so far outpaced our spiritual development (especially in the 20th and 21st centuries) and can certainly conceive of the possibility we could destroy ourselves, I am more optimistic: I say humanity is ready for free energy – on the condition that it is decentralized and put in the hands of many, not just the rich and powerful.

Free energy is exactly the kind of technology which could break up the existing hierarchical social order and restore a level playing field for all. People could keep each other in check. If everyone had their own unlimited energy source, there would be way more independence and individual freedom, and way less coercion from one powerful, centralized group at the expense of everyone else. As it stands, Tesla and others had their technologies stolen, and they have now ended up at places like Skunkworks (part of Lockheed Martin) and part of other off-budget, top-secret black military operations, thus widening the gap between the rulers and servants of our society.

The problem with saying that free energy should NOT be made available to all is this: who decides? Who plays God or monarch or tyrant and gets to make that decision? One group of people who appoint themselves rulers and think they know best? That is an apt description of the New World Order. Would it not be better to challenge ourselves to grow up and use free energy for the benefit of all?

How would anyone ensure that free energy is decentralized and placed in the hands of the many? Good question. Ultimately, with the internet and the rapid spread of ideas and information, I believe this will happen of its own accord, and it will be only a matter of time before these devices become widespread. The Big Oil cartel cannot control everything. The day is coming where free energy devices will be cheap and readily available. Although humanity has not done the best job of handling other technologies – by allowing them to be weaponized and controlled by psychopaths – I think the global rise in consciousness that is sweeping the globe will help us grow up and be capable of handling free energy for the benefit of all.