Foreign Meddling in Syria: Decades Longer Than You Thought …

Foreign Meddling in Syria: Decades Longer Than You Thought … 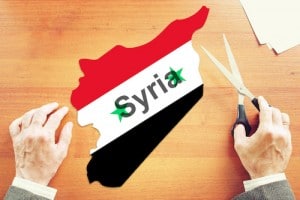 Foreign meddling in Syria has been going on

for a very long time now. For over a century, Syria has had to fend off aggressive and colonialist world superpowers in order to retain its independence and sovereignty. Even if we just examine a brief history of Syria for 100 years from 1916-2016, the degree of foreign meddling in Syria is extreme (although knowing the heinous crimes of the US-UK  NWO [New World Order] Empire of the last century, perhaps we shouldn’t be surprised at all). Syria spent the first 30 years of this 100 year period fending off mostly French, but also to a large degree British, ambitions upon its territory. Although it finally gained independence from France in 1946, only 2 years later Israel was formed out of the rib and flesh of Palestine, creating another Syrian nemesis. The US got in on the scene around this time as well. All in all, Syria has had to defend itself from the foreign intervention attempts of the US, UK, France and Israel for a long long time. The current war in Syria – a foreign war, not a civil war – is a continuation of 100+ years of intervention by these same NWO nations. 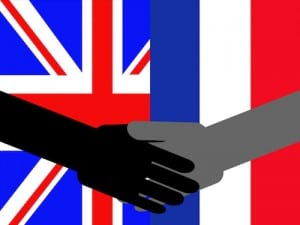 Foreign meddling in Syria in 1916: Briton Mark Sykes and Frenchman François Georges-Picot signed a secret agreement to carve up the Middle East.

Exactly 100 years ago is a good place to begin a brief history of Syria, for it was in 1916 that the British and French signed the Sykes-Picot Agreement (with the Russians being involved as a minor player) during World War 1. During that war, Britain, France and Russia (the Triple Entente Powers) were all on the same side fighting against the Ottoman Empire (former Turkey), Hungary, Austria and Germany. This agreement anticipated the collapse of the Ottoman Empire, so secretly divided up the Middle East. Fast forward to today, and ISIS (ISIL or the Islamic State) has specifically vowed to reverse this agreement.

The following year in 1917, the Rothschild family and other Zionists had gained sufficient influence or control over the British Government to get it to issue the Balfour Declaration (addressed to a Rothschild) which promised Jews a homeland in Palestine – even though Palestine was at the time 85% Arab and only 7% Jewish, and even though Palestine was illegally stolen by the British and made into a colony. This document later served as the basis for the Zionists to create Israel out of Palestine in 1948.

In 1920 and 1925, France suppressed two independence movements in Syria. In 1936, Syria and France negotiated a Treaty of Independence, but this treaty never actually came into effect, because the French Legislature refused to ratify it. In the same year that World War 2 ended (1945), France tried to stop another Syrian independence movement, but in 1946, Syria finally gained its independence from France. However, it was about to encounter 2 other aggressive nations that would prove to more formidable: Israel and the US. 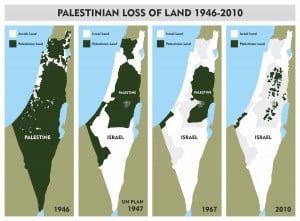 Palestine has been decimated since Israel’s creation.

In 1948, Israel was created out of Palestine, on land stolen by the British. At that time, Palestine and Syria shared a border. Soon afterwards, the first act of the Arab-Israeli War broke out. In 1949 (just as in 2016 – nothing’s new under the sun) geopolitics and geo-pipelines played a major part in foreign meddling in Syria. US President Truman sent his newly formed CIA (Central Intelligence Agency) to sponsor a coup in Syria, to bring in a leader that would favor western desires to build an oil pipeline through its land.

The next US president was Eisenhower, a former military general who appointed Allen Dulles as head of the CIA – a bad move for nations like Iran, Guatemala and others who subsequently got infiltrated, invaded or overthrown. In 1956, the CIA again orchestrated another coup in Syria. In 1957, there was yet another American coup attempt. In the very same year, a young senator from New York by the name of John F. Kennedy gave a famous and bold anti-imperialism speech calling for the United States to stop its foreign meddling in Syria and other Arab countries. Interestingly, Dulles was the probable mastermind of the JFK assassination. In 1967, Israel attacked Egypt to begin the Six Day War (around the same time as it also attacked the USS Liberty in a false flag operation). When Syria attacked Israel at the urging of Egypt, Israel retaliated and captured much of the Golan Heights area, which it has claimed and held ever since. 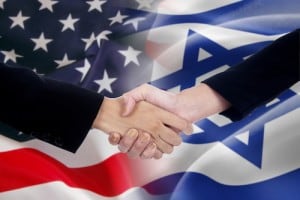 After Syria got rid of France, it then had to contend with the US and Israel, who have not gone away.

In 1982, an Israeli think tank released a study authored by Oded Yinon entitled A Strategy for Israel in the 1980s. In a strategy that we have now come to see repeatedly by the power players of the New World Order, Yinon proposed that the Arab countries be split up into smaller regions for the sake of Israel’s security. (Just last month in February 2016, Israel called for the partitioning of Syria.) In 2003, the Bush administration imposed economic sanctions on Syria for allowing refugees from the war in Iraq into Syria, which weakened the Syrian economy. Syria proposed to the United Nations Security Council that the Middle East become a chemical weapons-free zone, but the proposal was blocked by the US so that Israel didn’t have to give up its arsenal of chemical weapons.

In 2006, there was a very revealing harbinger of things to come. William Roebuck, the chargé d’affaires at the US embassy in Damascus, issued a communication (leaked by Wikileaks) which outlined the strategy for destabilizing the Syrian government. He also stated that the increasing presence of Islamic extremists was an “opportunity” to overthrow that government (wink, wink …)! Syria has been a secular republic since its inception, so the NWO powers have seen an opportunity to fund the extreme opposition (religious fanatics) and install a puppet regime. This plan became an actuality in 2007 when the Bush Administration began to fund activities of the Muslim Brotherhood, a fundamentalist Islamist group which has for decades has supported the violent overthrow of the Syrian government.

In 2011, the current war in Syria began. It has always been a foreign war, with proxy forces fighting on behalf of foreign superpowers, using them as tools, fodder and disposable pawns in a grander geopolitical game. In 2012, the US DIA (Defense Intelligence Agency) stated in a document that the West, the Gulf Countries and Turkey all “support the Syrian opposition” and that “there is a possibility of establishing a Salfist (i.e. Islamic fundamentalist) Principality in Eastern Syria”. ISIS magically sprung onto the world scene in 2014, taking over parts of Syria, driving Toyotas from the US State Department and having their soldiers receive special treatment in Israeli hospitals! 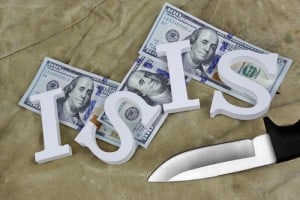 ISIS was made in the US and Israel after years of planning. It’s the latest tool of foreign meddling in Syria.

ISIS: Made in the US and Israel

ISIS is a clear and obvious US-Israeli creation. Obama himself stated that “ISIL [ISIS] is a direct outgrowth of al-Qaeda in Iraq that grew out of our invasion of Iraq”. Former UK foreign secretary Robin Cook said that “The truth is, there is no Islamic army or terrorist group called Al Qaida. And any informed intelligence officer knows this. But there is a propaganda campaign to make the public believe in the presence of an identified entity representing the ‘devil’ only in order to drive the ‘TV watcher’ to accept a unified international leadership for a war against terrorism”. Iraqi Shiite cleric Muqtada al-Sadr told Baghdad demonstrators that “the CIA created ISIS”. Iraqi Treasury Secretary Haidar al-Assadi proclaimed that “The Islamic State is a clear creation of the United States”. In 2015, US General Lloyd Austin, Commander of US Central Command, told US senators that the Pentagon had spent $500 million to train and arm “moderate” insurgents in Syria and had only produced “4 or 5 moderate fighters”! That’s not 4,000 or 5,000, or even 400 or 500, but 4 or 5 fighters! Where did all that money go? To ISIS, perhaps?

Sadly, now in 2016, figures from this source state that as of March 1st 2016, 220,000 Syrians have been killed since 2011, 11.3 million refugees (out of a total population of 24 million) have bene forced to flee their homes, and a sizable portion of Syria’s infrastructure has been destroyed. All for what? So the US-UK-Israeli axis, along with their friends France and Germany, as well as Saudi Arabia, Turkey and the GCC nations, can get their promised pipeline and achieve their geopolitical goals?

Clearly, the current foreign war in Syria is not an isolated incident. Stronger countries, following the philosophy that might is right, have been invading and infiltrating weaker countries since the beginning of recorded history. Syria has been bullied for a long time, and it is merely one country in a long list of US aggression. It’s high time humanity awoke to the overall game plan, and stopped falling for the propaganda that allows nations like US and UK to go war on false pretexts of “humanitarian interventions”.

Previous Article
Is There an Israeli Brussels Connection? Is Belgium Terror “Made in Israel”?
Next Article
Top 20 Modern Doublespeak Terms To Be Aware Of