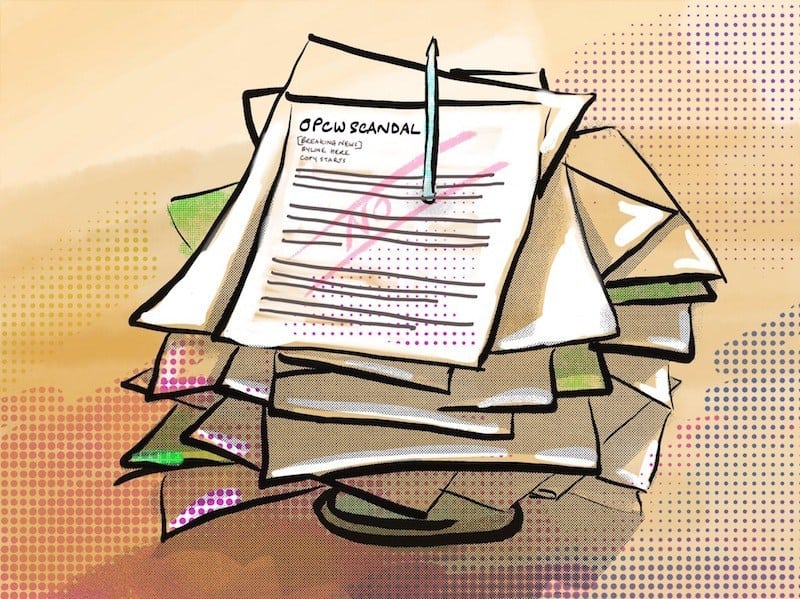 Fake News By Omission :  The MSM refuses to discuss the fact the OPCW report was faked, this distorting people’s perception.

Fake news by omission is the theme

as the Western mass media have continued their conspiracy of silence on the OPCW scandal, making no significant mention yet this month of the leaks which have been emerging from the Organisation for the Prohibition of Chemical Weapons indicating that the US, France and UK bombed Syria last year in retaliation for a chemical weapons attack which probably never occurred, and that OPCW leadership helped cover it up.

If you haven’t been following the still-unfolding OPCW scandal, you can catch up quickly by watching this seven-minute video.

A leaked email accuses the OPCW of doctoring a report to suit the US government’s justification for its illegal bombing of Syria in April 2018. I explain the scandal mainstream media is trying to supress: pic.twitter.com/MTS4OWwqkH

Mass media’s silence on this hugely important story is noteworthy not just because it has far-reaching consequences for the future of the Syrian regime change agenda and for public trust in US-led war narratives, not just because the leaks have already been independently authenticated by the mainstream press, and not just because scandalous revelations about powerful entities are normally the sort of incendiary click fodder that makes a mainstream news editor hasten behind his desk to hide his arousal. It is also noteworthy because we’re being told by people in the know that even more leaks are coming.

“Much more to come about the censoring of the facts on Douma at the Poison Gas Watchdog OPCW,” tweeted journalist Peter Hitchens earlier today. “It really is time that the Grand Unpopular Press and the BBC, realised this is a major story. Are they too proud to admit they might have been wrong?”

Hitchens, who was among the very first to publish the leaked internal OPCW email last month revealing multiple glaring plot holes in the official narrative about the alleged chlorine gas attack in Douma, Syria, has been saying this for a while now.

“More is known by the whistleblowers of the OPCW than has yet been released, but verification procedures have slowed down its release,” Hitchens wrote in his blog last week. “More documents will, I expect, shortly come to light.”

So this is still an unfolding story that is only going to get more scandalous in the coming days. Yet rather than reporting on an important news story (which it may surprise you to learn is actually supposed to be the literal job description of the news media), the mainstream press has been silent. The only times the mass media have commented on this major story has been to spin it as Russian disinformation, and Tucker Carlson’s segment on it last week which was also falsely spun as disinfo by establishment narrative managers like David Brock’s Media Matters for America.

It may be hard for some to grasp this concept, but not telling people about something that *did* happen gives them just as incorrect knowledge about reality as does telling them something did happen which actually did not. That’s why “fake news” (by omission) is the right term. https://t.co/9p1yioLydc

The blog Left I on the News uses the term “fake news by omission” to describe this obnoxious yet ubiquitous propaganda tactic, where imperial media outlets deliberately distort people’s understanding of what’s going on in the world by simply declining to cover news stories which are inconvenient to the establishment narrative.

Refusing to tell people about things that did happen distorts their worldview just as much as telling them things that did not happen, yet mass media will never be held accountable for engaging in the former, while engaging in the latter forces them to print embarrassing retractions and lose credibility with the public. For this reason, fake news by omission is their preferred tactic of deceit.

People sometimes think of the mainstream media as always straight-up lying all the time, just fabricating stories whole cloth about what’s going on, but that isn’t generally how it works. A good liar doesn’t lie all the time, and they don’t even tell full lies unless absolutely necessary. What they do is far more cowardly and far more effective: they spin, they distort, they tell half-truths, they emphasise insignificant details and marginalize significant ones, they uncritically report what government officials are telling them, and they lie by omission.

However, the total disappearance of the OPCW leaks is unusual for the legacy media. The imperial press have had their ways of hiding inconvenient stories since newspapers began. Running stories late on a Friday, running them on the “graveyard page” of page 2 (so-called because stories go there to die), holding on to them until another big story breaks so they can be published relatively unnoticed, waiting for them to be broken in a disreputable publication so people will be skeptical of it (sometimes known as “fixing” a story), or running an oppositional op-ed at the same time to spin the uncomfortable facts in a more salubrious way. But in the end, they usually run the story, in one way or another, so they can be seen not to be censoring.

Not this time though. The exceptional silence on the OPCW scandal from imperial news media, in and of itself, discredits them completely. But people won’t know about it unless they are told. Spread the word.