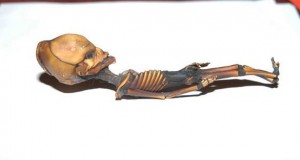 ET Discovery? This miniature 13cm Andean humanoid may be alien. The DNA testing confirms that it contains a lot of unmatched (and therefore possibly non-human) DNA.

has recently been in the public spotlight. The fossil was found in 2003 in the very dry Atacama Desert, part of the Andes in Chile  – and may be alien in origin. Its unusual features, such as its relatively large skull in comparison to the rest of its body (a common trait of ET species), has led of a team of ET researchers led by Dr. Steven Greer to conduct DNA testing on the specimen. The results (which can also be viewed in the movie Sirius) of this possible ET discovery have just come in …

Greer and his team went to some of the leading experts in the world to try to get an answer on whether this Andean humanoid was extraterrestrial or not. So far, what they have found and reported gives some credence to the theory that this is a genuine ET discovery. Dr. Ralph Lachman, from UCLA School of Medicine and expert on child genetic deformities, said: “There is no known form of dwarfism that accounts for all of the anomalies seen in this specimen.” A preliminary study of the bones showed that the fossil could not be a fetus because the creature had lived outside the womb for several years. Further bone studies age the fossil at around 6 years old at the time of death. How such a tiny humanoid could remain alive for so long in such a dry and desolate part of the world is still a mystery.

Another important aspect of the specimen is that it has 10 ribs (not 12) – a mutation never before found in human beings.

Does Unmatched DNA Mean Non-Human DNA or an ET Discovery?

The most startling part of the scientific analysis was conducted by Dr. Garry Nolan, a professor of microbiology at Stanford University. His findings showed that the corpse did indeed have human DNA, making it at least part human, but also unmatched DNA. In a tweet Greer wrote, “2 million base pairs of DNA DO NOT MATCH human DNA – and yet much matches human DNA. Hybrid? Much work to do yet. It is not so simple.” We still don’t know whether this unmatched DNA is non-human DNA, so we are just at the beginning of unraveling this exciting mystery and possible ET discovery.

The Andean humanoid phenomenon shows us humanity’s consciousness is expanding and we are becoming more aware of the Universe around us – including extraterrestrial life. There are thousands of people from all ranges of life – including military officers and politicians – who have already come forward and publicly testified that they believe we are surrounded by various ET species and that indeed there are aliens among us. ET disclosure is already (unofficially) under way. How long will it be before there is a full acknowledgement of the facts from all governments around the world, including the US Government? In the meantime, will there be another ET discovery?

You can read Greer’s full analysis of the Andean humanoid here:

Previous Article
ETs Are Real: The True Story of How Eisenhower Wanted to Invade Area 51
Next Article
US Support for GMOs and Pesticide-Caused Bee Deaths Could Trigger WW3, Warns Russia