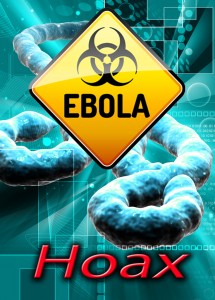 The ebola hoax pushed by the mainstream media is fooling and scaring many people. In truth ebola is being hyped up to the max as an excuse to force-vaccinate.

Welcome to the Ebola Hoax!

The US Government and the Rockefeller-created WHO (World Health Organization), part of the Rockefeller-created UN (United Nations), are doing a grand job indeed of hoaxing it up right now when it comes to ebola. Just to be clear – ebola exists. There is an ebola virus that was most likely manufactured in the US-funded Kenema bioweapons lab, with links to elites Bill Gates and George Soros. When I say ebola hoax, I am saying the hype surrounding ebola, pushed by the mainstream media, is totally out of proportion and manufactured to induce fear – to sell more vaccines, prepare the ground for forced vaccinations, pass draconian legislation to limit rights, and create a One World Dictatorial Medical System. Some of the reporting and video footage of this ebola psy-op (psychological operation) are so laughably absurd and fake it really reminds me of the Sandy Hook hoax – the biggest school shooting that wasn’t. At Sandy Hook, almost everything was fake; with ebola, it seems mostly (but not all) fake.

Although depopulation is undoubtedly a documented NWO (New World Order) objective, and using bioterrorism is a known means for the NWO conspirators to achieve this, they haven’t quite pulled it off this time with ebola. At least not yet. In truth ebola is another contrived enemy to fear (like ISIS), although it is fooling even some in the alternative media. Consider some of the obvious clues that it is indeed to fair to label this whole phenomenon as the “ebola hoax”:

Let’s begin with the basics. How can you be sure that anyone has ebola, when the CDC (Center for Disease Control) is using the PCR test, which as Jon Rappoport has written about, is unreliable by itself? It’s a tiny sample. It may detect the presence of the ebola virus – but so what? It doesn’t tell you how strong the virus is, or in what quantity it is present in the body. Importantly, it can’t tell you whether the person’s immune system will easily kick it out. As Rappoport writes, “Therefore, the CDC’s gold standard for testing Ebola patients says nothing about whether they are sick or will become sick. It says nothing about why some patients do become sick.”

Rappoport even quotes a DOD (Department of Defense) manual which says:

“[The PCR test] should not be used as the sole basis for patient management decisions. Results [of the PCR] are for the presumptive identification of the Ebola Zaire virus (detected in the West Africa outbreak in 2014).” Presumptive meaning they presume – they don’t know!! 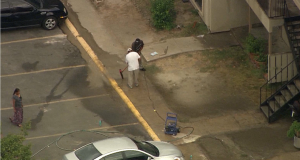 Look at this ebola hoax cleanup: there’s a woman about to walk through it in sandals!

Ebola Hoax Clue #2: Fake Victims in Spain and the US

We were fed a whole scene that purportedly showed a person (Teresa Romero) getting infected in Spain, although as this analysis shows, there was something very fishy about it, from the van magically changing number plates midstream to the hazmat attendants doing military salutes. Later we were told that she didn’t have ebola.

As for America, we were told it had entered through Dallas, Texas, yet as this analysis and this analysis show, things don’t add up. If this were really the killer contagious virus it’s made out to be by the mainstream media, why the lackadaisical approach taken by bystanders? Why are people cleaning up supposed ebola vomit in a t-shirt? What about the classic Illuminati symbology and numerology at the Ivy Apartments? Why does the supposed victim Thomas Duncan always wear a green shirt in every photo? Why does the supposed ebola victim Ashoka Mukpo have links to Obamacare?

Here is a partial list of the ebola crisis actors used so far. Did you know that one of the supposed victim’s mother is called “Nowhy” (= “No why”)? This is more subtle conditioning on a subliminal level to get you from challenging authority or asking too many questions. Don’t ask why! Check out Jeff C. from FreeRadioRevolution in this clip where he exposes crisis actors literally reading straight from a script.

Ebola Hoax Clue #4: If Ebola is So Real, Why Have Signs Everywhere Reading “Ebola is Real”?

I agree completely with Melissa Melton on this one. If ebola is really as deadly and contagious as we are being told, then why are there massive signs everywhere in Liberia stating “Ebola is Real”? I think the population would understand if it’s real or not, judging by how many people around them are getting sick or dying.

Since the symptoms of ebola are very broad (vomiting, bleeding, diarrohea, fatigue, weakness, lack of appetite), and these very same symptoms could be caused by a multitude of different causes – especially ones like malnutrition and lack of proper hygiene, which are perennial problems for Africans – it is very easy to convince casual onlookers that people are dying of ebola when they are not. What about the report on the Liberian Observer that a man was caught intentionally dumping formaldehyde in the water supply to poison people and make it look like ebola? The report states:

“The man also alleged that some water companies, particularly those bagging mineral water to sell, are also involved. The poison, he said, produces Ebola-like symptoms and subsequently kills people.

The Observer had previously been informed that people dressed as nurses were going into communities with ‘Ebola Vaccines’. Once injected, it reportedly produces Ebola-like symptoms and sends victims into a coma. Shortly thereafter, victims expire. Communities are now reportedly chasing vaccine peddlers out of their communities. After 10 children reportedly died from the ‘vaccine’ in Bensonville, the peddlers were reportedly chased out of the community upon their next visit.

It is possible that the ‘vaccine’ is/was composed of the same formaldehyde-water mixture. This publication has received reports from families whose loved ones’ organs were missing upon return of the bodies to the families. Families suspect an organ trafficking operation is capitalizing on the outbreak of the Ebola virus in Liberia.”

Formaldehyde just so happens to be one of the main adjuvants and ingredients in vaccines, which brings us to the next point: are people acquiring ebola through the NGOs (Non Governmental Organizations) like the Red Cross, via vaccines?

Jim Stone has posted some explosive information from an African named Nana Kwame of Ghana, who wrote:

“The Red Cross has brought a disease to 4 specific countries for 4 specific reasons and it is only contracted by those who receive treatments and injections from the Red Cross. That is why Liberians and Nigerians have begun kicking the Red Cross out of their countries.”

I have seen other Liberians on YouTube clips stating it outright: “Ebola is a lie. They want people’s blood.”

It seems the reason for the ebola hoax is not really depopulation (as you might expect), although it may kill some, but rather an excuse to bring in US troops across an entire region – to Sierra Leone to force wage slaves to continue mining diamonds, and to Nigeria to steal new oil resources – and to force vaccinate the scared and unaware public in Western countries. 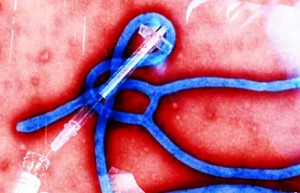 We know that the pharmaceutical company Tekmira cut a deal with the DoD (Department of Defense) to develop an ebola vaccine, and we know that Monsanto invested in Tekmira. We know that Bill Gates has thousands of Monsanto shares, so there are some high-up players who are going to profit big-time from selling ebola vaccines. They will profit even more if they can ratchet up enough fear that the Government actually mandates forced vaccinations. Dr. Anthony Fauci, director of the U.S. National Institute for Allergy and Infectious Diseases, part of the NIH, said that “as the epidemic gets more and more formidable and in some cases out of control it is quite conceivable, if not likely, that we may need to deploy the vaccine to the entire country to be able to shut the epidemic down.”

However, it is another question entirely about whether enough people would obey such a harmful and unconscionable regulation.

Recent reports indicate a 2nd ebola vaccine is on its way. Be aware, keep a cool head, get your information from alternative sources and question everything regarding this ebola hoax.

Previous Article
Western Medicine is Rockefeller Medicine – All The Way
Next Article
ISIS and Ebola: 2 Contrived & Convenient Enemies for You to Fear