The Disempowering Beliefs of Mainstream Christianity

The Disempowering Beliefs of Mainstream Christianity

Disempowering beliefs are rife throughout organized religion. Mainstream Christianity has many beliefs which remove self-responsibility and power. Be aware of them!

because religion is by definition an attempt to box God and spirituality into set limits and parameters. By doing so it distorts the purity of the original message. If you grew up in the West, it is probably easy for you to see this, for example, in Islam. Islamic teachings put the responsibility on the woman to uncomfortably cover herself up from head to toe (in some of the hottest countries in the world) rather than on the man to control his sexual energy. The underlying belief behind this is that the woman is a temptress and has all the power, while the man is a poor victim who can’t control his own urges. While we in the West may easily be able to spot this disempowering belief in Islam, we are sometime immune, numb or blind to the disempowering beliefs of mainstream Christianity, which are equally flagrant in my opinion. (Note: I am here referring to the larger sects of Christianity, such as Catholicism and the traditional Protestant ones, and not to more enlightened Christian sects such as Christian Science.)

Karl Marx wrote that “religion is the opium of the masses”, and Thomas Paine wrote that “of all the tyrannies that affect mankind, the tyranny of religion is the worst.” As much as I respect people’s desire to go beyond meaningless materialism and consumerism and find a deeper meaning, organized religion is just another box to jump into, or another set of limitations with which to enslave yourself. Consider how the following beliefs subtly or in an outright manner remove your power and responsibility.

Disempowering Belief #1: We Are All Sinners

Sooner or later, discussions between “believers” and “non-believers” seem to boil down to this point: we are all sinners, thanks to the actions of a mythical Adam and Eve in the Garden of Eden who disobeyed God’s instructions and ate the apple. There is no evidence that Adam or Eve ever existed, yet even if they did, we are told that we are inherently “bad” or “sinful” because of the purported actions of alleged figures in a supposed garden.

When is humanity going to grow up and stop feeding itself these kind of disempowering stories? We tell them to our kids, and they tell them to their kids, and on it goes, with each generation infecting the next with limiting ideas about Who We Are. The metaphysical text “A Course in Miracles” described the opposite of love not as fear, as you might imagine, but rather as guilt. I think that is a highly accurate and perceptive observation. If God and love are synonymous – if God is love – then anything which is promoting guilt is going in the opposite direction. Guilt is the feeling of unworthiness. It leads to self-hatred, lack of confidence and many other dysfunctional psychological states.

Christian apologists defend the disempowering belief of us all being sinners by claiming it explains man’s tendency to act selfishly. Sure, that aspect to humanity is definitely real and present, however it is not going to be transformed and healed by layering more guilt on top of it. That will only make healing even harder. There are ways to embrace and change this side of ourselves without resorting to fanciful tales that merely make us feel bad about ourselves.

Have you ever stared into the eyes of a newborn? It is a magical experience where Life creates itself anew. Why taint that with the limiting notion that every newborn is somehow a sinner? 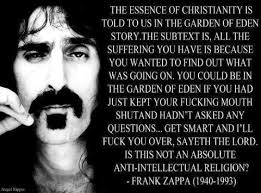 In the funny and perceptive quote above, Frank Zappa describes Christianity as the absolute anti-intellectual religion. When the questions get too hard to answer, religion likes to resort to faith. It likes to fall back on the idea that, well, the universe is a mystery and we will never understand it. So stop trying to know it all, you arrogant mortal!

Yet curiosity is a part of ourselves. Has it not been wired into us to drive us forward?

The idea that all the troubles of Adam and Eve, or that all the troubles of humanity, stem from our desire to know, is another incredibly disempowering belief. It’s also a very useful belief for rulers to instill in the minds of the sheeple, for it can easily be used by any would-be tyrant to discourage critical thinking and the challenging of authority. It can easily be used by elite manipulators to get the poor and middle class to stop protesting, accept their “lot” and acquiesce to their enslavement.

Disempowering Belief #3: Just “Believe” and You Will Be “Saved”

One of the strangest disempowering beliefs of mainstream Christianity is the idea that you don’t need to do anything to be “saved” (whatever that means). Of course, this presupposes the idea that there is such a thing as heaven and hell, that there is a judgmental and punishing God, etc. But for argument’s sake let’s pretend that’s all true (a big stretch I know). The teaching is that no matter how bad your actions and intentions are, as long as you believe in the official doctrine (i.e. that Jesus is God who dies for your sins) then you will be “saved” and go to heaven. That’s it. No benevolent intent or action required.

Talk about an abdication of responsibility!

Of course, this disempowering belief is a continuation of the last. It’s all about the praise and promotion of “faith” and “belief” over knowledge and experience. Ask yourself: what’s more useful and ultimately more real – believing something or knowing something because you’ve experienced it?

Disempowering Belief #4: God Will Judge and Possibly Punish You (If Need Be) … But He Loves You

Another glaring contradiction and disempowering belief in mainstream Christianity involves the invention of an angry, vengeful, punishing and judgmental God. Of course, Christianity is not the only religion to have such a god, and certainly not the first. The ancient Romans had their own pantheon of gods, as did the Greeks, as did the Egyptians, as did the Babylonians. Many of these “gods” are incredibly imperfect characters; you can read with amusement the tales of the king of the “gods”, Jupiter/Zeus, womanizer-in-chief. Modern Christians may think they are all above that, but in reality, the same kind of obvious anthropomorphism is at play with the Christian “God” as with the earlier Roman “gods”.

You don’t need a degree in psychology to understand the idea of projection, and that we unconsciously project traits within ourselves (within our shadow side) onto things outside of ourselves. The Christian “God” is a reflection of this.

George Carlin did a brilliant and extremely funny stand-up routine (the video above) where he describes the Christian narrative: God will send you to a place of eternal damnation, replete with fire and brimstone, if you don’t follow his 10 guidelines. But … he loves you!

Disempowering Belief #5: Being Gay is Unholy and Sinful

I am truly tired of the argument trotted out even by intelligent Christians that being gay is somehow wrong, bad, sinful, wicked or <insert your judgmental word of choice here>. I am a heterosexual man who sees absolutely no problem with someone’s sexual orientation. Why does it matter if some men are sexually attracted to other men, and some women are sexually attracted to other women? We get bombarded with the idea that sexual orientation is a choice, but overall, I disagree. It is largely an innate thing rather than a choice or lifestyle. Love is love. To all those whose harbor homophobic feelings: stop condemning others from loving who they want just because you’re scared and intolerant. Take a look at why you have such a reaction to it. Who knows – maybe you’ll actually learn something about yourself in the process. 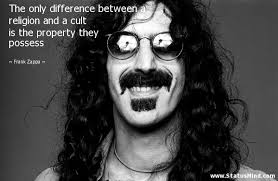 Disempowering Belief #6: God is a Man

Here we go again: masculine anthropomorphism to the rescue! Why is the mainstream Christian God male? Simple: because a patriarchic hierarchy invented “Him”. If God is the philosophical “first cause” and the source of the universe, why would it have any gender? Why would it not include both genders? All of life has a masculine and feminine aspect encoded within it. Plants have stamens (masculine) and petals (feminine). Every man has a feminine side, and every woman has a masculine side. The Chinese Taoist symbol of yin/yang symbolizes this basic truth excellently.

So why do we keep referring to God as a man? It’s another disempowering belief, one which anchors us in to the patriarchic paradigm.

Disempowering Belief #7: Humans Are Not God or Part of God

Finally, I am going to end with a huge heresy, a blasphemy that could well get me burning in hell for eternity.

Therefore, simple logic will tell you that you must be God.

Every “thing” in existence is God, or more accurately, everything is “Godding”, in the process of being and becoming God, because God is truly a verb not a noun.

However, this is not all of it. I think “God” is best described as an intent and a power, half of which is present throughout the Universe as a force to be called upon and used, and the other half of which is split up into a zilllion individualized pieces, which are the soul/energetic field that animates every living being.