Currency Crisis: How Much Longer Until it Hits the US?

Currency Crisis: How Much Longer Until it Hits the US? 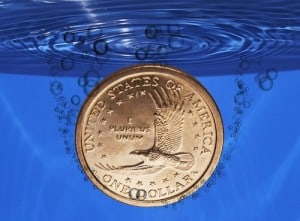 The coming Currency Crisis is a mathematical certainty, and it may come sooner rather than later. The dollar has sunk and confidence has been destroyed to the point of no return.

A currency crisis is coming to the US …

and it’s only a matter of when, not if. Many have been warning about it for years, from politician Ron Paul to economist Peter Schiff to many other voices in the alternative media. It’s a mathematical certainty, and a question of when, not if. Recent events, within the US and abroad, are beginning to indicate that it’s going to happen sooner rather than later. No one knows exactly when; there are way more predictions that don’t come true than those that do. However, making an accurate prediction of the exact date when the currency crisis hits is not as important as getting spiritually, mentally, financially and physically prepared for it.

Currency Crisis Rather than an Economic Collapse

When I use the term currency crisis to describe what’s coming, I don’t necessarily mean an economic collapse. There was an economic collapse in 2008 when the stock market crashed and the real estate/housing bubble burst (just as other bubbles have burst in the past like the dot.com bubble), but many ordinary Americans were unaffected by that. I am saying that a currency crisis will occur and that it will affect everyone, even people living outside the US, but especially those living inside the US and holding the majority of their wealth in US dollars. By currency crisis I mean the destruction of confidence in the US dollar to the point where people and nations do not trust it anymore as a safe storage of value, and do not want to use it any longer to transact.

Watering Down the Dollar to Escape Debt

Ever since the end of World War 2, the US has enjoyed tremendous prosperity, partly due to the US dollar acting as the world’s reserve currency, and also partly due to the institution of the petrodollar, the system whereby nations must trade oil in US dollars. However, both of these are starting to break down. The US has gone from the world’s largest creditor nation to the world’s largest debtor nation. Since all this debt is denominated in US dollars, the elite cabal in charge of the US dollar, the Rothschild-Rockefeller Federal Reserve cartel, decided to do what any criminal would do: water down the debt so as to not have to pay back as much. Think about it: if you owed money in a certain currency to someone, and if you were in charge of determining the value of that currency, and if you had no scruples, wouldn’t you just make the value of that currency worth less to save yourself money?

This explains the disastrous rise in the US money supply we have witnessed in the last 10 years or less, so extreme it is without historical precedent in America. The money supply has increased exponentially since around 2006. The US national debt stands at around US$18.271 trillion; the first $8.5 trillion of debt took 216 years to accrue (from 1790 – 2006), whereas the next $8.5 trillion of debt took only 8 years to accrue (2006 – 2014). As Michael Snyder writes, the US national debt is now more than 5000 times larger than it was when the Federal Reserve was created back in 1913!

The big consequence of the US Government trying to escape its debts is that people begin to see all these excess dollars in circulation. They realize that each dollar is now worth less, because there are way more of them. That’s inflation. With the watering down of a currency come the inevitable watering down of confidence. And confidence has been all that has been backing the US dollar ever since 1971 when Nixon suspended the convertibility of dollars to gold, or took the US dollar off the gold standard. Once confidence is gone, it is very difficult or impossible to regain.

BRICS and a New Reserve Currency

That is why nations around the world are starting to make other arrangements. Iraq’s Saddam Hussein and Libya’s Muammar Gaddafi both tried to break away from the domination of the petrodollar in attempting to sell their oil in other denominations. Sadly, both were demonized by the elite-owned western mainstream media, had their countries invaded on false pretenses and were ultimately assassinated. However, the game has changed since then, and now a group of powerful nations known as BRICS (Brazil, Russia, India, China and South Africa) have begun making their own trading arrangements. China has even come out urging the IMF to consider its currency the Renminbi as the new world reserve currency, and recently founded a new international development bank in an attempt to create an alternative to the Anglo-American dominated IMF and World Bank. Even traditional American allies like Australia and Britain jumped right on board with this new bank, much to the dismay of the US.

For far too long, the US has been living in a fake, fantasy economy. The coming currency crisis represents the tipping point we are about to reach when a critical mass of people, investors and nations completely lose confidence in the dollar. At that point, the cost of financing the debt becomes too much, interest rates start to rise again, prices skyrocket, there is hyperinflation and – all of a sudden – people’s life savings are worth a portion of what they used to be worth. It’s a scary scenario but the natural, inevitable consequence of the reckless borrowing and money-printing the US Government has engaged in for the last decade or so. Remember, the US Government can declare fiat or paper money as legal tender, but it can’t legislate confidence or generate trust in it.

Official US Government statistics paint a true picture of the state of American finances (see Stefan Molyneux’s video embedded above). More people than ever are on food stamps and welfare; the Government is fudging the figures to hide the real number of unemployed; and the Government has no real way to pay pensions and social security going into the future. When the currency crisis does hit, the dollar will either crash to zero or be severely devalued – and it could all happen in a matter of hours, not days, weeks or months. It could get ugly. When prices skyrocket, pensioners and others on a fixed income will be the worst affected, since the same amount of income will only buy a fraction of what it used to. A bank holiday may be declared to stop a run on the banks; ATMs and other ways to access cash may be shut down; there may be riots and social unrest; martial law may be declared.

Will the Currency Crisis Occur in 2015?

Will the currency crisis occur in 2015? No one knows, but if so, it might explain why the elite have scheduled Operation Jade Helm 15 for this year. In politics, nothing happens by chance, as FDR once said. See this article for more on the deeper implications and causes for concern regarding Jade Helm, but basically, it violates the centuries-old legal principle of Posse Comitatus (an Act passed in 1878) which forbids the US military from being deployed on US soil. It declares certain states as hostile – especially Texas, which just so happens to be home to a massive number of gun owners, patriots and secessionists who would fight the Federal Government to the death (Texas, by the way, just passed legislation to build its own gold depository and demanded US$1 billion of its gold back from the NY Federal Reserve!). It further blurs the distinction between the police and military. It encourages the US military to become a guard-dog and private army of the elite, able to be deployed against anyone whom the elite declare “an enemy of the State”. Is this all just a coincidence? Citizen journalists have caught copious video footage of military vehicle movements around America in the last few months. Is it just a coincidence that some of this is happening in Jade Helm states, such as California, Nevada and Texas?

We don’t know why all this is happening, but one thing’s for sure: you need to get informed and prepared. The writing is on the wall. Knowing about all these possibilities helps you connect the dots together and make better decisions from an informed state. Forewarned is forearmed. On a practical level, invest in tangible things such as food and water reserves, gold and silver, survival supplies, and real estate or farmland. Use the upcoming currency crisis and Jade Helm as a wake-up call – the fantasy economy can’t go on forever.

Want the latest and greatest news and analysis on Conspiracy, Natural Health, Sovereignty, Consciousness and more? Sign up for free blog updates!

Previous Article
Jade Helm: 10 Deeper Implications
Next Article
Pope – Positioning Himself to Be Head of Planned One World Religion?