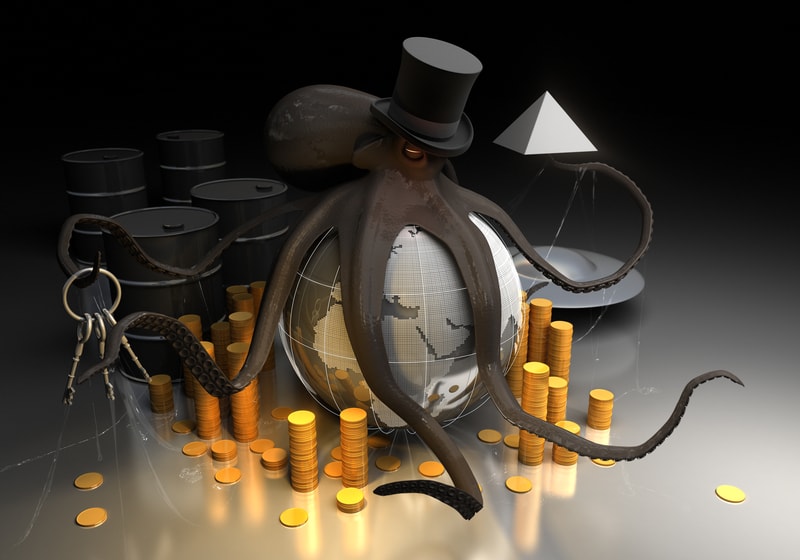 The NWO controllers are criminally exploiting the COVID-19 coronavirus (so far no more dangerous than seasonal flu) to shove their one world agenda down our throats.

COVID-19 is being used to usher in everything – even suggestions of a World Government.

I certainly don’t claim to be a financial wizard. In fact, at best, I have a rudimentary understanding of how the convoluted funny money economy works. However, you don’t need to fully comprehend the ins-and-outs of rigged monetary system to understand we’re in for big trouble and the coronavirus “pandemic” is not only accelerating the fall but will make the outcome far, far worse.

For more detail on the financial end of this disaster, read Mike Whitney’s Why Washington’s COVID-19 Relief Package Must Be Stopped!

No chance, however. As I write this, Congress passed a pork-laden“stimulus” bill.

If we can believe numbers put out by the CDC, as of Friday, March 27 there were 1,246 deaths in the US attributed to the virus. Compare this with the 1968 H3N2 “Hong Kong Flu.” It reportedly killed 100,000 people in the US and around a million around the world.

At the time, the response was not to lock down the country and destroy the livelihood of millions of Americans and usher in the severe violations of the Constitution we are now witnessing.

Short of COVID-19 numbers shooting into the stratosphere in the long run, the death rate will be nowhere near those of the H3N2 pandemic. After the virus is put down by warm temperatures in the Northern Hemisphere, jobless and impoverished Americans will scratch their heads in wonderment at the overreaction by government.

Back in 1968, the US economy was doing fairly well. It was the economic powerhouse of the world. The economy began the slow process of engineered deterioration after the so-called “Nixon shock” imposed wage and price freezes in response to Federal Reserve manufactured inflation and the direct international convertibility of the dollar to gold in 1971.

10% inflation in the 1970s was “the result of the honest mistakes of a well-meaning central bank (sic),” according to the Fed.

The former Fed boss, Ben Bernanke, said in 2002 “honest mistakes” were also responsible for the stock market crash in 1929 and the Great Depression that followed (see Jerry Mazza’s How the FED engineered the Great Depression; for historical comparison of the current economic trauma prior to COVID-19, see Doug Casey: Comparing the 1930s and Today).

Is the current corporate propaganda media-generated hysteria over what appears thus far to be a normal influenza virus happenstance?

I argue the pandemic was planned or conveniently exploited, if not beforehand then in its early stage as it swept China. I am convinced the virus was arranged or exploited to make an excuse for a coming and unavoidable Greater Depression, a historically unmatched depression as a direct result of the fraud, manipulation, and gambling debts of the financial class. Blame for the pinpricks deflating absurdly enlarged and distorted asset bubbles horrendously crashing the economy will be laid at President Donald Trump’s door.

Moreover, the crash and its enforced misery—only now beginning to gain fatal momentum—will be used by the ruling elite to demand several drastic “reforms,” beginning with a call for a centralized world government. This globalist scheme, long in the planning, will be rolled out “temporarily” to confront the virus.

From The Guardian on March 27:

Brown’s “executive power” will become permanent after the virus has subsided. It will be the foundation for a global government after the world economy finally falls off a cliff—possibly weeks or months away—and the desperate masses begin rioting in the streets over food shortages and the inevitable institution of martial law (or something similar without the namesake in an end-run around the Constitution, which does not explicitly grant emergency powers to a president).

Prior to Gordon Brown’s demand, bankers and establishment economists began a heightened call for “a digital alternative to paper money” to stop the spread of the virus and “helping improve financial inclusion by addressing the needs of millions of Americans that remain unbanked, according to the FDIC.”

In January, the elite at Davos was way ahead of the curve on the effort to dispose of paper money and replace it with a digital financial and societal control mechanism.

“Users of the U.S. dollar are ‘underserved by an analogue currency in a digital world,’ Christopher Giancarlo, former chairman of the Commodity Futures Trading Commission (CFTC), said during an event in Davos,” CNBC reported.

It would also make tracking and surveilling citizens far easier and more efficient. “There are two kinds of economic surveillance to take note of. One is surveillance by companies, the other is by the state,” writes Melissa Twigg.

There appears to be no end to the manufacture of state and media-generated hysteria.

ABC News notes that a “Department of Homeland Security memo sent to law enforcement officials around the country warns that violent extremists could seek to take advantage of the COVID-19 pandemic by carrying out attacks against the U.S… The memo, which was circulated on Monday, comes after assurances from FBI Director Chris Wray in a video message that agents would be even more vigilant in monitoring threats to the U.S. as the virus spreads.”

Last August the FBI “for the first time has identified fringe conspiracy theories as a domestic terrorist threat,” according to a memo circulated at the FBI’s Phoenix office.

For those who pay attention, there is ample evidence the FBI arranges terrorist plots and has done so at least since the agency ran its unconstitutional COINTELPRO takedown of numerous political opponents beginning in the 1950s.

Both the FBI and DHS may begin categorizing those of us who differ with the state and its media on the origin and impact of the coronavirus as “domestic extremists” bent on destroying the nation.

The real destroyers and psychopathic misanthropes, however, are in high places. They are cynically and criminally exploiting the coronavirus—so far no more dangerous than seasonal flu—to shove their one-world agenda down our throats as easily frightened Americans run around like Chicken Little, begging the state to take care of us before the sky falls.

Previous Article
230 Years of Rights and Liberties Shredded: Why I Oppose The Lockdown
Next Article
Insider Exposes COVID-19 Coronavirus Scam