Cop Ticket Quotas: The Ultimate Antithesis to a Free Society

Cop Ticket Quotas: The Ultimate Antithesis to a Free Society 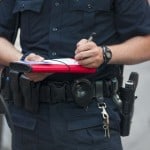 Cop ticket quotas destroy a free society, providing an incentive for our supposed protectors to extract money from people guilty of no real crime (no injured party).

Cop ticket quotas are another symptom

of a society that has lost touch with the basic tenets of freedom. It conclusively proves that Government is out of control and has utterly exceeded its mandate to “serve and protect”. Cop ticket quotas have nothing to do with serving, unless you mean serving the police department’s budget aims for that year. Let’s face it: these quotas are a giant revenue extraction scheme which affects every driver in society, and people have had enough.

As the story in the above video clip reveals, there are numerous cops within the force who refuse to book innocent people, or hunt down people just to create more tickets. They want no part in chasing down citizens for ridiculously minor or non-existent infractions, people who are following the spirit of the law but maybe not every letter of the law. But that’s the idea – put so many laws (statutes) on the books that virtually everything is illegal, so you can catch anyone at any time.

The more corrupt the state, the more numerous the laws. – Tacitus

History repeats itself, until humanity learns the lesson and moves to a higher state of consciousness. The fall of the US Republic is echoing the fall of the Roman Republic, with an absurd amount of laws being spurned by the US Government. Don’t even try to count them all, because according to Ronald Gainer, a retired Justice Department official, “you will have died and resurrected three times,” and still be trying to figure out the answer.

Cop ticket quotas are one of many tyrannical tools, changing a police force to a military force

When cops book people just because their superintendent told them to boost their numbers for the month, it destroys trust in the community. People no longer feel they can trust the police, who after all were set up to protect them, and that has an intangible but disastrous effect on society. Many people have noted with alarm how our police are becoming more and more like military, equipped with tasers, tanks, new lethal weapons and other hi-tech gear. The protector has become the oppressor; the servant has become the master.

What can you do in the face of cop ticket quotas to take back your power?

One important thing to remember with cop ticket quotas is that no matter what policy or regulation they are trying to enforce, it’s not really law. It’s a statute, which is a rule that has the force of law only with the consent of the governed. And, as the basics of sovereignty declare, you do not have to give your consent. Here are some questions you can ask a cop if you are ever stopped for a speeding ticket or similar infraction:

If you’d like to know more on the topic of sovereignty, asserting your rights and beating cop ticket quotas, see our Sovereignty Basics package.