Conspiracy evidence is often asked for by naysayers 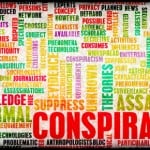 Want conspiracy evidence? Watch the same speech, word for word, given by 2 different Prime Ministers. Pretty hard for even the staunchest skeptic to explain this one away!

who find it hard to believe that the world is being run by a Shadow Government behind the scenes. Some people simply can’t fathom the monstrosity, depth and breadth of the global conspiracy and still mistakenly think that elected politicians are the ones in charge. Although this is not breaking news, the example in the video clip above is still, 10 years later, a stunning example of how the people on stage are mere puppets of a hidden and more powerful force that dictates to them exactly what to do – word for word.

If the supposedly sovereign nations of Australia and Canada were really sovereign, why would their respective leaders read exactly the same speech, word for word? [As an aside, these two nations aren’t really sovereign; technically they are still British colonies on the books, as can be evidenced by the fact that the Head of State in Australia is the Governor General (the Queen’s representative), not the Prime Minister. Also, Australia’s so-called Federation (where the various states came together as a nation) is an Act from the British Parliament!]

But regardless of whether these countries are British on the books or not, they are part of an Anglo-American alliance which forms a great part of the New World Order. And, as such, they have to play ball or suffer the consequences. Howard and Harper were and are seasoned politicians who know the game; they wouldn’t have gotten to such a position of power if they didn’t know how to tow the party line.

The truth is that it was not in Australia’s or Canada’s best interests to attack Iraq, and Iraq certainly posed no threat to them. As it turns out, the WMD (weapons of mass destruction) line was a complete fabrication used to justify war on a country had significant resources and geopolitical importance for the US.

Next time you see Prime Ministers and Presidents talking, ask yourself: who’s writing the script?