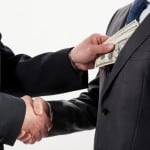 A recent congresswoman bribe request was brazenly left by Eleanor Holmes Norton on a lobbyist’s voicemail. Bribery, whether illegal or legalized, is the norm for today’s politicians.

The recent congresswoman bribe request was a voicemail

left by Eleanor Holmes Norton, a Democrat from DC who is a senior member of the Transportation and Infrastructure Committee, as well as the chair of the Subcommittee on Economic Development and Public Building Emergency Management. The political corruption is so egregious that it has become standard operating procedure for US politicians to demand and expect bribes before even considering what to do or where to allocate resources.

Congresswoman bribe request: why aren’t you “giving” to me?

When Holmes Norton says “giving”, she means bribing. When she states that she’s “candidly calling to ask for a contribution”, she means she shamelessly asking for a bribe. That’s how it works in politics in America, or in pretty much any country for that matter. People get into power and then their net worth goes up by millions. Why? Because they get bribed left, right and center, and also because they indulge in insider trading, and use their inside knowledge of governmental policy to invest in certain industries or companies about to receive grants or funding. This congresswoman bribe example is shocking not so much in and of itself, but because the brazen way she asked belies the fact that it’s completely normal for politicians to get bribes like this.

Legalized bribery: the hallmark of a decaying society

Just in case you think all of this is highly illegal, think again. These politicians have found ways to legalize bribery and codify criminality, so even if their activities and behavior are immoral, unethical and unlawful, they are not technically illegal. That’s our society today: big on image and small on substance, big on the letter of the law, small on the spirit of the law.

Hopefully this congresswoman bribe may be an instance of such flagrant corruption that it wakes some people up.

When plunder has become a way of life for a group of people living together in society, they create for themselves in the course of time a legal system that authorizes it, and a moral code that glorifies it. – Frederic Bastiat