The Commercialization and Weaponization of Just About Everything

The Commercialization and Weaponization of Just About Everything 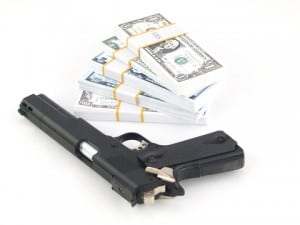 The commercialization and weaponization of just about everything on Earth has been taking place for a long time. Now Nestle CEO Brabeck wants to privatize the planet’s water.

are the two chief obsessions of the New World Order, which aims to turn everything in existence – the Earth’s natural resources, people’s labor, creativity and imagination, and the sum of human knowledge – either into something that can be owned, bought and sold, or something that inflicts harm on another. Money and guns. Of course, behind money is the desire to control, and behind guns is the desire to control. Commercialization (as symbolized by money) and weaponization (as symbolized by guns) are really about power. The New World Order is essentially a plan to consolidate and centralize as much power as possible into as few hands as possible.

In the video above, Nestle CEO Peter Brabeck professes his desire to privatize water, to give it a “value”. He describes the common opinion that water is a basic public right as an “extreme position”. In the inverted world of the wealthy elite who run the world, it is extreme to insist that some things are not for sale. These guys are used to buying anything, including buying votes or favors from politicians, judges and bureaucrats who they have in their back pockets. They worship money and consider commercialization their right; never mind the fact that privatizing something like water can only benefit the few, who would then control through a monopoly or oligopoly, and force people to pay anything – literally anything – for it. Remember, potable water is essential for life; without it, we’d be dead in a few days. Can you imagine what heartless, soulless corporations could get away with charging for water when consumers’ lives depended on it?

Commercialization means you have to pay just to exist on this planet. Gone is the idea that the planet’s resources are for the common good. In the planned New World Order of megalomaniacs like Brabeck, you would have to pay for rent, food, water and probably even air. You may think that’s taking it too far, but such schemes are already in the works, and can be seen in the hijacked Green agenda of Global Warming. Al Gore and other such deceivers have been working to set up a global carbon tax (all based on the phony scientific theory of manmade global warming) – which could easily mean you’d be taxed just for breathing! This is, in essence, paying for air.

Alongside out-of-control commercialization, we have rampant weaponization, the crazed initiative to turn everything into some kind of weapon. Science has become increasingly militarized; funding is given to those who can come up with some discovery or invention useful for the military-industrial complex. Scientific knowledge is taken, twisted and used for purposes of destruction. No scientists are immune to this; even the great Albert Einstein lamented the fact that his knowledge was used in the making of the atomic bomb dropped twice on Japan during WWII.

In the military world, things are done on a “need-to-know” basis. That way, knowledge is highly compartmentalized. You can have various people and groups working on a big project, each doing their own part, with none of them realizing the overall point, purpose or big picture. That way you can bypass any moral scruples individuals may have in constructing death weapons, because they literally do not know what they are doing or how their labor and efforts will be used.

Weaponization also relies on everything and everyone being so highly specialized that they lack the broader perspective to accurately assess whether what they do will really help humanity. As Mike Adams of Natural News writes:

“Very few scientists, no matter how smart they are in their own fields, have the breadth of historical knowledge to assess their research activities in the proper context of human history. Most scientists, in fact, are only smart in their own extremely narrow fields of expertise. Outside that “genius zone,” they may be complete novices on everyday subjects like nutrition, economics, human psychology, social interaction skills and how to read the true intentions of others. Thus, they are quite often easily tricked into working for evil, destructive or domineering forces such as Hitler, the NSA or the U.S. government. Just because a person is really smart in one area doesn’t mean they have the street sense to avoid having their smarts exploited for an evil agenda.”

Weaponization is a reflection of the “evil genius” side of humanity. It shows the danger of knowledge without wisdom, of intellect without compassion, of brain without heart.

Whether humanity goes further down the road of commercialization and weaponization is up to us. Eisenhower warned in his farewell address about the grave danger posed by the rise of the military-industrial complex. We need to stop enlisting, stop investing in military companies and stop supporting war. We need to stop acquiescing and letting politicians hand over everything to a small group of wealthy corporate executives. There are certain things which belong to the public and are not for sale. By privatizing and commercializing, we lose the power to control them.

Remember, as the native American Indian saying, goes: “The Earth does not belong to us; we belong to the Earth.”