Despite being top secret, barrels on planes commissioned to spray chemtrails have been discovered and photographed

Chemtrails are the gaseous trails of barium, aluminum and strontium oxides,

in addition to other bacteria, viruses, fungi and pathogens, which are being deliberately sprayed into the atmosphere from planes in order to carry out numerous nefarious purposes as part of the NWO geoengineering and depopulation agendas. The chemtrail program, also known as “Project Cloverleaf“, is so top secret and compartmentalized that even the pilots themselves have no real idea of why they are actually spraying! As this photo shows, barrels of toxic barium sulfate and other poisons are placed onto planes. The gases are then delivered by tubes to nozzles on the plane wings (to make it look as though they are coming out of the jet’s engines), from where it’s dispensed into the atmosphere to poison the lands, rivers and people below. 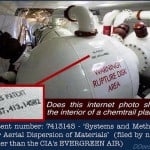 Chemtrails are not contrails! As any experienced pilot will tell you, contrails are the condensed vapor trails left behind by the jet’s engines which quickly dissipate – normally within 10-20 seconds. There has been a massive disinformation campaign launched to baffle people and get them to confuse the two. The cover story for chemtrails is that they are being sprayed to protect us from the sun ray’s, partially blocking them to stop global warming. However, the real purposes behind chemtrails are much more nefarious, including depopulation, destruction of the natural, organic food supply, mind control, obstruction of DNA evolution and as an aid to Project Bluebeam. People are even contracting a deadly new disease called Morgellon’s disease, and the evidence is linking it to chemtrails.

What can you do about it? As always, the first step is to step out of denial and ignorance and to be aware of the reality of chemtrails. Then, spread the truth about them. There are initiatives being taken to pass county ordinances against the aerosol spraying (e.g. on Maui, Hawaii). On a personal level, you can also take this amazing natural supplement called ChemBuster – a combination of herbal and homeopathic remedies deliberately designed to combat chemtrails.

Previous Article
The Flexner Report: How John D. Rockefeller Used the AMA to Take Over Western Medicine
Next Article
Organized Religion Uses Faith as a Tool to Quash Critical Thinking