Cause of Cancer Explained? Widespread Monkey Virus SV-40 From Old Polio Vaccines Could Be One of the Factors

Cause of Cancer Explained? Widespread Monkey Virus SV-40 From Old Polio Vaccines Could Be One of the Factors 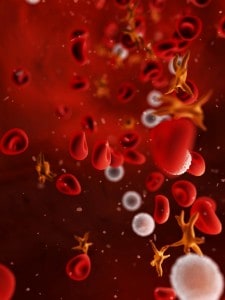 It’s the cause of cancer no one is talking about … cancer-causing monkey viruses like SV-40 were injected into millions of Americans via contaminated polio vaccines.

The cause of cancer,

a disease becoming so widespread today in America and in many other parts of the world, could fairly be attributed to EMF pollution, or radiation, or GMOs (Genetically Modified Organisms), or pesticides and harmful chemicals in our food supply, or even fluoride in our drinking water. However, in addition to these carcinogenic elements, there is another factor that has laid dormant for years and could now be starting to rear its ugly head: SV-40, SV40 or Simian Virus 40, the cancer-causing monkey virus which was found in all the polio vaccines administered to Americans up until around 1963.

In Dr. Mary’s Monkey, an interview of Ed Haslam by Jim Marrs, we learn the astonishing story of how the US Government sought to weaponize these cancer-causing viruses, and had planned a conspiracy to use a strain with which to kill Fidel Castro. This wild story even has links to the JFK assassination, since Lee Harvey Oswald was the guy transporting these toxic vaccine viruses between different labs in New Orleans. Beyond the conspiracy, however, we face a bigger issue that affects us very directly: the fact that at that time millions of Americans of all ages were vaccinated with the contaminated polio vaccine before it was recalled. Cancer was the 2nd leading cause of death in the US in 2010. Could it be that the monkey viruses injected in young children all those decades ago are now finishing their period of dormancy in these baby boomers and starting to reactivate?

The difficult thing in assessing the extent to which these viruses are being reactivated is that mainstream Western Medicine is in denial about it – or deliberately covering it up. How many people that we are told died of CAT scans, for example, really died because the radiation triggered a latent virus? Many viruses (such as HHV [Herpes], EBV [Epstein Barr Virus] and CMV [Cytomegalovirus]) can be reactivated through stress, a toxic environment and a lowered immune system, among other things. Dr. Randy Tent has studied the subject quite extensively and believes these monkey viruses, first introduced via the polio vaccine, may be the cause of cancer today that no one is talking about or even aware of. 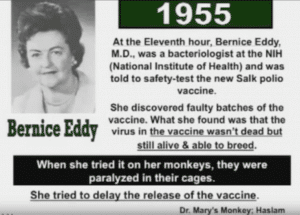 We were alerted to the SV40 cause of cancer thanks to Dr. Bernice Eddy. In the Congressional papers The Executive Reorganization and Government Research of the Committee on Government Operations United States Senate, Ninety-Second Congress, Second Session [1972] it states on page 500 (according to VacTruth):

“The next and only serious vaccine crisis that has occurred since the polio episode was the realization in mid-1961 that a monkey virus later shown to cause tumors in hamsters was contaminating both polio and adenovirus vaccines. The virus, known as SV40, was entering the vaccines and, just as in the polio case were surviving the formalin treatment.

There were several states by which the full extent of the SV40 problem became known. First was the discovery in 1959-1960 by a DBS scientist, once again Bernice Eddy, that an unknown agent in the monkey kidney cells used to produce polio and adenovirus vaccines would cause tumors when the cells were injected into hamsters.”

Remember that Big Pharma corporation Merck through their vaccine chief at the time, Dr. Maurice Hillerman, already admitted that Merck’s Hepatitis B vaccines were contaminated with a virus that caused the AIDS epidemic in the US! He also stated that all of Merck’s vaccines are contaminated with cancer and other viruses. And these are (often forcibly) administered to people without their knowledge, making this akin to mass poisoning or murder. As Dr. Robert Bell, once Vice President International Society for Cancer Research at the British Cancer Hospital, once said:

“The chief, if not the sole, cause of the monstrous increase in cancer has been vaccination.”

How to Stop These Possible Causes of Cancer

So, armed with this information, the question is: what can you do to keep these viruses at bay and stop them potentially causing cancer inside of your body? Start with curcumin, the active ingredient in turmeric, a revered and potent herb which inhibits autoimmune disease and may help keep a virus in its dormant state – permanently. Olive leaf extract is a wonderful anti-viral substance. Also try Gene Eden, an all-natural supplement made of Nature’s best anti-viral plants, designed specifically to kill latent and dormant viruses. Above all, avoid radiation and other known environmental carcinogens which could trigger a dormant virus. Take charge of your own health. A cause of cancer can be nipped in the bud and never potentiate if you are proactive.

Previous Article
Michael Jackson Mind Control: Slave to the Rhythm
Next Article
The Conspiracy is Over – If You Want It