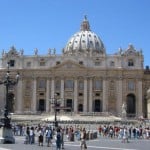 The recent Catholic Indulgence Bribe (where the Vatican gives indulgences to those who follow Pope Francis on Twitter) is the same old manipulation: “follow us (& pay us), or you’ll suffer more in the next life”

offered by Pope Francis is utterly absurd – yet many poor and lost souls will probably dutifully go for it. Pope Francis recently offered “indulgences” (in Catholic Church jargon this is basically a kind of cancellation of punishment) – to the faithful who sign up and follow him on Twitter, the social media site. Before you choke on your food in laughter, let me explain that this kind of thing is nothing new from the Vatican. Remember, the Vatican has been around 2000 years and has built quite a following by using fear and guilt to manipulate people. Promises of a better afterlife in some form, way or manner is one of the oldest tricks in the book.

In order for someone to buy into the Catholic indulgence bribe, they already have to believe the following:

1. There is a God who requires certain things from you;

2. If you don’t do them, He is a judgmental God who will punish you for it;

4. The Vatican or the Catholic Church is the only authority on Earth that knows the various ways out, and it will tell you what to do to get forgiveness.

It’s a pretty farfetched story, yet there are billions on Earth who buy it. By the way, it’s not just the Catholic Church; it’s organized religion in general. Many religions use the idea of a better afterlife to convince people to do things now. However, religion is divorced from true spirituality; a truly spiritual (and therefore empathetic and compassionate) person would do a deed prompted by love for another, or to bring joy to another, not because they thought they would avoid punishment in another life.

The insidious thing about it is that the Catholic Church uses the story to attract more followers and earn more money (oh yes, the Vatican is a giant corporation which owns a lot of gold; they are very interested in acquiring wealth). They delude people for their own benefit.

Don’t Fall for the Catholic Indulgence Bribe; you don’t need any Outside Authority to Forgive You

You forgive yourself. You don’t need permission from some guy in a frock to be saved. That’s the bottom line.

Previous Article
The Way to Overcome the Conspiracy Part 5: Create a New System Rather Than Resisting the Old One
Next Article
NSA Whistleblowers: The Top 5 in a Growing List