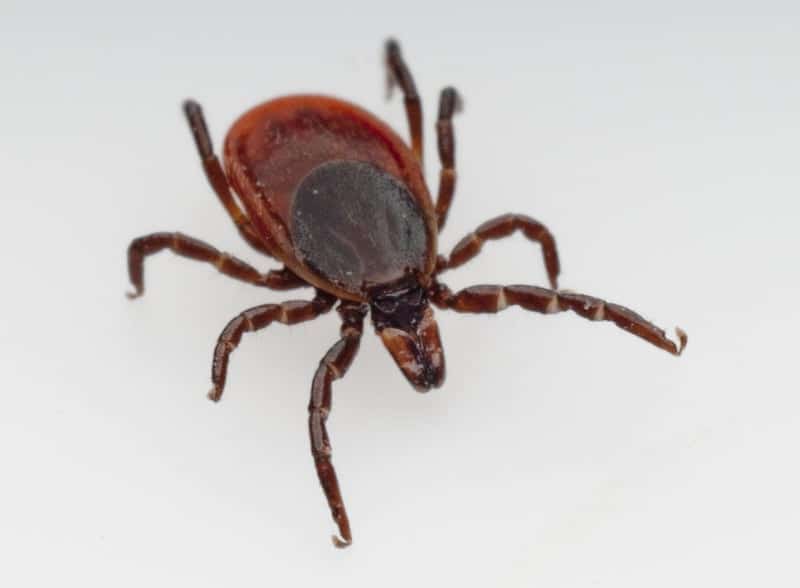 Using bugs as bioweapons … an old idea with a lot of experimentation behind it from multiple nations.

were in the news recently when US Congressman Chris Smith (R-NJ) introduced Amendment 116-19 which was subsequently passed by the US House of Congress on July 11th, 2019. The US House ordered an investigation to determine whether the DoD (Department of Defense) experimented with ticks and other insects between 1950 and 1975 to create bioweapons (biological weapons). Smith, who has a long history of bringing awareness to Lyme Disease, said he was inspired to pursue the matter after reading a book by Kris Newby entitled Bitten: The Secret History of Lyme Disease and Biological Weapons published this year. The fact of the matter is that the US Government and Military have a long history of experimentation with bioweapons, some of which has caused fatal consequences. It is time for the truth to come out.

What is Lyme Disease?

Lyme Disease is named after the small US town of Lyme (Old Lyme), Connecticut. In 1950, a mysterious disease first broke out in Lyme which defied textbook descriptions and which was characterized by strange symptoms, making it very hard to diagnose. Lyme Disease has multiple symptoms including muscle aches, joint pain, fever, chills, impaired memory and facial paralysis. If bad cases, it can lead to arthritis, nervous system disorders, heart problems and death. The most common disease spread by ticks is Lyme Disease. The CDC estimates over 300,000 people are diagnosed with the disease each year. Tellingly, 95% of US cases come from just 14 states, centered around Connecticut. Despite its severity, doctors and insurance companies have been reluctant to come out and diagnose Lyme Disease, in some cases convincing patients they were delusional to think there was something wrong with them, or changing diagnosis after the 30-day mark. This renders the 300,000 number quite meaningless. The book Bitten features a new whistleblower William Burgdorfer, after whom the bacterium that causes Lyme Disease is named (borrelia burgdorferi). Burgdorfer revealed that Lyme Disease was the result of a biological weapons program gone awry, one in which he himself participated. He reveals that the bioweapons research involved using blood-sucking insects – not just ticks (which were the best) but also fleas and mosquitoes – as vectors for the transmission of human diseases. 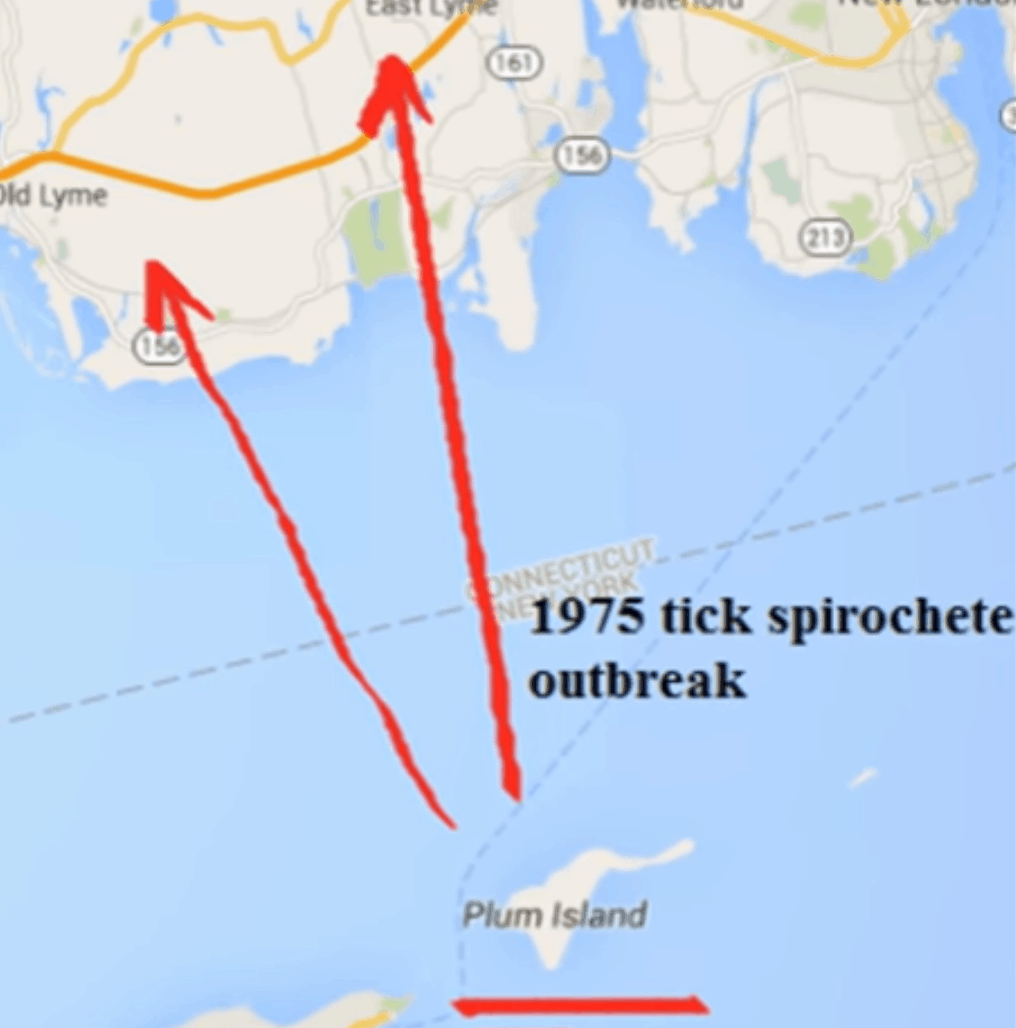 The town of Lyme is only 9 miles from Plum Island, former bioweapons research center.

Now, Lyme just so happens to be right across from Plum Island, New York. And Plum Island just so happens to be a former center for biowarfare and bioweapons research. In 1897, the War Department owned Plum Island (then called Fort Terry). In 1954, the US Army officially transferred it to the USDA (United States Department of Agriculture) to be used as an animal disease laboratory, after which it was upgraded a bio-level 4 facility. What was the US Military doing there? It was experimenting with ticks and other insects to see if could create an effective bioweapon, i.e. a disease which could be carried by the insect that would then bite and infect people. Research at Plum Island dates back to just after WW2 when the USG (US Government) brought Nazi scientists into the USA under Operation Paperclip (for more background to this read 20 Declassified Files that Prove Governmental Crime and Conspiracy – Part 1). This article in the Journal of Degenerative Diseases (August 6th, 2002) quotes a source stating that 60% of people with chronic Lyme Disease are co-infected with several strains of mycoplasma. Mycoplasma are the smallest bacterial cells yet discovered, have no cell walls and can survive without oxygen (are anaerobic). Interestingly enough, the most common strain is mycoplasma fermentens. Guess what? This strain is patented by the US Army and its pathologist Dr. Shyh-Ching Lo: Pathogenic Mycoplasma, US Patent 5,242,820, issued September 7th, 1993! The article goes on connect the dots between Lyme Disease and other mysterious diseases that doctors seemed very reluctant to diagnose:

“It is becoming evident that any microbe that has been ‘modified’ is considered ‘off limits’ for treatment and any physician that takes these chronic infections seriously, is targeted for harassment. This same pathogen is found in Gulf War Illness, Fibromyalgia and Chronic Fatigue patients! Could this be the main reason why the symptoms of all these diseases overlap to such a degree and all seem to have emerged around the same time period?
…

It seems very coincidental that …

2) Many Lyme and Gulf War Illness patients are infected with the same genetically engineered organism (mycoplasma fermentens) created and patented by the US Government.

4) Doxycycline is one of the drugs of choice for both diseases.

5) Both sets of patients are being denied antibiotic treatment.

7) Yale University often works with Plum Island on various projects and they are in close proximity to each other.

8) Yale, again, is one of the main opponents of long term antibiotic treatment for Lyme Disease in spite of it’s obvious benefits.”

In typical fashion, it took a long time for the USG to admit that Lyme Disease was real and that Lyme Disease was a possible bioweapon. In 2005, the University of Texas at San Antonio opened a new research lab for bioterrorism. It was reported that the facility would be there “to study such diseases as anthrax, tularemia, cholera, lyme disease, desert valley fever and other parasitic and fungal diseases. The Centers for Disease Control and Prevention identified these diseases as potential bioterrorism agents.”

One famous scientist brought in under Operation Paperclip was Dr. Erich Traub, who worked under Heinrich Himmler, the 2nd highest top-ranking Nazi just under Hitler. During WW2, Traub oversaw a program where the Nazis sprayed occupied Soviet territory with viruses from planes. Traub was instrumental in setting up research on Plum Island. He worked for the US Biological Warfare Program from 1949-1953, during which time he consulted with CIA and also worked at Fort Detrick, Maryland, another bioweapons center. Traub is mentioned in this Truthstream Media video and also in Michael Carroll’s book Lab 257: The Disturbing Story of the Government’s Secret Plum Island Germ Laboratory. In that book, Carroll claims he had a source who worked on Plum Island in the 1950s. This source:

“recalls that animal handlers and a scientist released ticks outdoors on the island. “They called him the Nazi scientist, when they came in, in 1951 – they were inoculating these ticks.”” 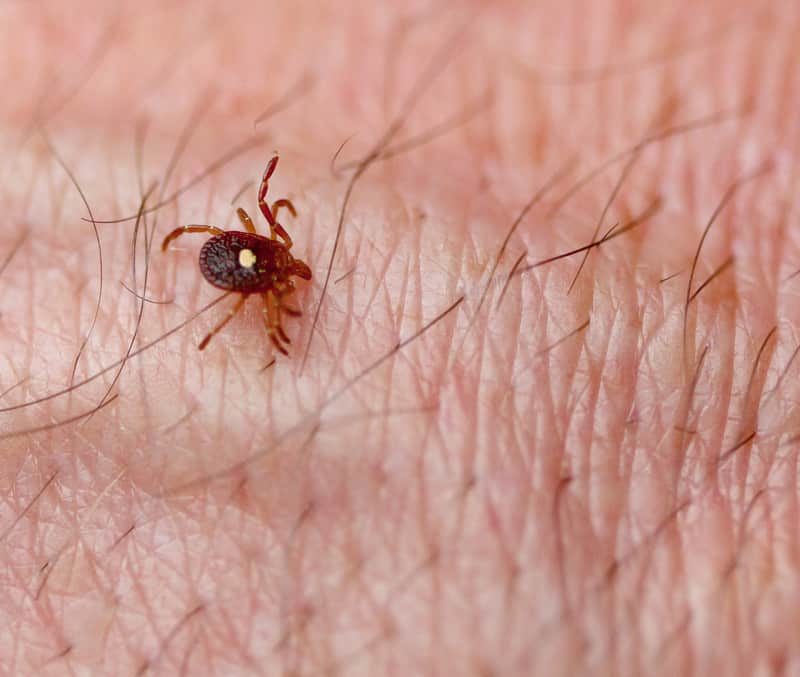 Weaponizing bugs is an old idea. Before and during WW2, Japan had an infamous military organization named Unit 731 (covered here) which weaponized insects, typically fleas infected with plague and cholera, which they used against Chinese civilians. When the Japanese lost WW2 to the Americans, US officials later cut the Japanese a deal whereby their scientific “research” was handed over in exchange for leniency (same deal the US cut with the Nazis via Paperclip). After WW2, the USG embarked on a host of bioweapon experiments upon its own people:

– Operation Sea-Spray (1950): this was a secret US Navy experiment where 2 bacteria, serratia marcescens and bacillus globigii, were sprayed over the San Francisco Bay Area in California;

– Norfolk Naval Supply Center experiments (1951): those running this test dispersed fungal spores to see how they would infect workers unpacking crates in this base in Virginia. Most of the workers were African-American. The plan was to test if they were more susceptible to fungal disease than Caucasians;

– Spraying Chemicals to Test Potential of Biological Weapons (1950s): in 1997, the National Research Council revealed that the USG used chemicals to test the potential of biological weapons in the 1950s. Zinc cadmium sulphide was dispersed by plane in open air testing. It was sprayed over many American cities, including St Louis in Missouri and Minneapolis in Minnesota;

– Operation Big Itch (1954): this experiment (Black Vault docs here) was designed to learn if fleas could be loaded into bombs. It turns out they could. The tests happened just a few years after the Soviets accused the US of dropping canisters full of insects infected with plague and cholera in Korea and China during the Korean War (just as Japan had done against China);

– Project 112 (1962): Then US Secretary of Defense, Robert McNamara, authorized this new program which greatly expanded bioweapons research. One of the most well-known and nefarious tests was in 1966 on the New York subway. Scientists filled light bulbs with bacillus globigii  (same bacterium as used in Operation Sea-Spray) and smashed them open on the train tracks. The bacteria traveled all around the subway system, with thousands of people breathing them in.

If you are new to this topic, the truth revealed in this article may be horrifying. I am reminded of a quote by the late William Blum, who said that “no matter how paranoid or conspiracy-minded you are, what the government is actually doing is worse than you imagine.” We have to keep digging, keep questioning and keep researching to uncover what is happening. This recent amendment may go nowhere, however at least it was a newsworthy event for the MSM, which serves to shine some focus on the outrageous deeds committed by a government that claims to represent us. Share the truth far and wide.

*Bitten: The Secret History of Lyme Disease and Biological Weapons (2019) by Kris Newby

Previous Article
Psychotechnology: How AI is Designed to Change Humanity
Next Article
US Empire: The Reality of the Greater United States