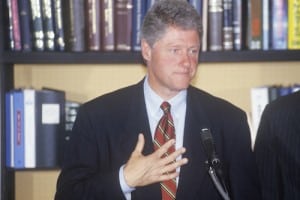 Billary Clinton is the rapist and coverup team of Bill and Hillary Clinton. Bill rapes, Hillary covers up. ‘Twas always so. They are a psychopathic duo.

is the monster that never seems to die. It is truly mind-boggling to consider that the pair of them are not behind bars. Billary Clinton has committed so many crimes it would take a court years to go over the evidence for all of them. Despite all of this, not only are Bill and Hillary free, but Hillary actually has the audacity to run for President, while being an accomplice or actively participating in countless acts of obstruction of justice, accepting bribes, perjury, theft, rape and murder (just to get started). Since the scope of the Clinton’s crimes is so broad, this article will focus on just one – rape. Specifically, we will look at how Bill has raped his way through the world right from the start of his career, and how Hillary has been there to cover it all up – with threats of lawsuits and murder to scare victims into silence.

Bill Clinton is not just a womanizer. He’s a sexual predator and he’s a rapist. Bill has repeatedly raped women right from the time he was a Rhodes scholar. Former Clinton insider Larry Nichols is one of several witnesses who has attested to the truth of it, with numerous stories of how he and the gubernatorial or presidential circle surrounding Clinton had to cover up for Bill the philanderer and rapist. Bill developed a nasty habit of biting his victims’ lips, which is a common technique used by rapists to break down a woman’s defense. In numerous instances, he also grabbed women’s breasts, vaginas, exposed himself and demanded oral sex. Here is an brief and incomplete list of some of the women Bill has raped: 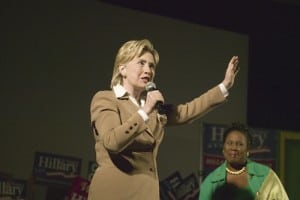 Hillary got pretty good at covering things up – and threatening – in order to ensure Billary remained in power.

The common theme to Bill’s raping is Hillary covering it all up. At some point, the two must have reached an agreement that in order for both of them to get into power, Hillary would have to play the coverup agent to Bill’s reckless and violent sexual indulgences. Hillary has terrorized many of Bill’s rape victims into silence with all kinds of threats (including death threats). The general pattern seems to have been to either force them into silence, or to falsely state the “sex was consensual”. Some of these victims have probably also joined the infamous Clinton body count. One example is Suzanne Coleman, who had an affair with Clinton when he was Attorney General of Arkansas, and died of “suicide” with a gunshot wound to the back of her head, who was 7 months pregnant at time of her death and who had told her friends it was Bill Clinton’s child. Another example is Judi Gibbs, a Penthouse model and prostitute, who was a regular call girl for Bill. There were apparently photos of him having sex with her that threatened his Presidential campaign. Another example is Gary Johnson, who was an attorney that happened to live next door to Gennifer Flowers, and had incriminating video evidence of Bill visiting her apartment for sexual encounters. He was attacked on June 26th, 1992, beaten, and left for dead.

Hers is what Juanita Broaddrick said about Hillary threatening her:

“I almost got nauseous when she [Hillary] came over to me … ‘I just want you to know how much Bill and I appreciate what you do for him’ … she took ahold of my hand and squeezed it and said, ‘Do you understand: everything that you do’. I could have passed out at that moment …”

Kathleen Willey says in addition to having her character smeared, she was not so subtly threatened:

“Along with the smears were acts of intimidation … Two days before her (Willey’s) testimony in the Paula Jones case, she says she was approached at dawn by a stranger while walking in her neighborhood. The man threatened her and her children by name, and references were made to her damaged car and missing 13-year-old pet. The message, she said, was clear: Remain silent.

A day after the deposition, she found an animal skull on her porch.”

On top of all of this, here is a excerpt of Hillary laughing about defending a rapist who she managed to get off the hook for raping a 12 year old girl.

Conclusion: If Americans Knew The Truth About Billary Clinton …

Now that Hillary is fighting it out with Bernie Sanders to capture the Democratic nomination, it’s more important than ever that people know the truth about the psychopathic duo of Billary Clinton. It’s bad enough that the two of them are still at large – let alone Hillary trying to be President. If enough people share this information and investigate the truth for themselves, we can at least hope to thwart the Hillary 2016 campaign and stop the Billary Clinton juggernaut from taking office again.

Previous Article
The Republic of Australia? Time Overdue for Island Nation to Shed Royals
Next Article
44 Reasons to NOT Elect Hillary Clinton