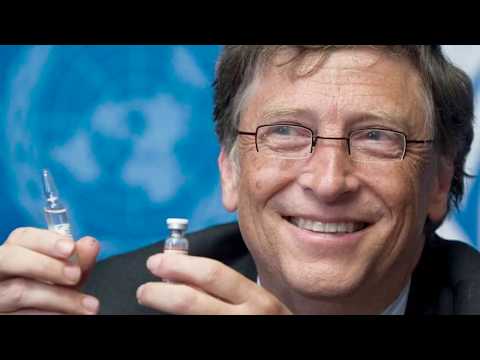 NWO (New World Order) frontman Bill Gates has suggested 1 of the 5 intrinsic, natural, human rights enumerated in the 1st Amendment to the US Constitution – the right to peacefully assemble – may disappear forever. That’s right: he actually suggested overriding a fundamental and innate human right due to the fake pandemic of the coronavirus. In a recent interview on CBS, Gates again didn’t miss the opportunity to push his mass vaccination ‘solution’ to the crisis he orchestrated. With so much evidence available linking Gates to this entire Operation Coronavirus, it is truly a wonder he is walking free and being given MSM platforms to spout his tyrannical agenda, rather than being arrested and charged for crimes against humanity. In the interview below around the 4:00 minute mark, Gates lays out the plan to entice you to get the coming coronavirus vaccine – to keep you on lockdown (i.e. house arrest) “unless you’re vaccinated.”

The True Psychopathy of Bill Gates on Full and Open Display

Here are the actual words of depopulation-via-vaccines enthusiast Bill Gates in the above interview:

“Even the issue of once you get the case numbers down, what does opening up look like? Which activities like schools have such benefits that can be done in such a way that the risk of transmission is very low, and which activities like mass gatherings may be in a certain sense more optional, so until you’re widely vaccinated, those may not, uh, come back, uh, at all.”

Did you catch that? May not come back at all? Who the hell does this guy think he is? Can you believe the arrogance and psychopathy of Bill Gates? He wants to play God and decide to overrule the natural human right to gather, to assemble and to get together for social, political, personal and any other reason, a right that belongs to every human being regardless of race or nation, and a right that has been enshrined for around 230 years in the US Constitution:

“Congress shall make no law respecting an establishment of religion, or prohibiting the free exercise thereof; or abridging the freedom of speech, or of the press; or the right of the people peaceably to assemble, and to petition the Government for a redress of grievances.”

Conveniently for the tyrants, this is also a key right when it comes to ensuring that people retain the power over their government, for revolution becomes impossible if people cannot gather together for a common cause.

The NWO agenda of “no return to normal unless you’re vaccinated” is being declared by many insiders, such as Ezekiel Emanuel, an architect of Obamacare, special adviser to the WHO Director-General and “coronavirus advisor” to Joe Biden. Emanuel is a well-known eugenicist and population control advocate who declared that “living too long is also a loss.”

Unless You’re Vaccinated: The Long-Term Planning of Bill Gates

Gates spreads vaccines around the world (especially poverty-stricken countries in Africa and South East Asia) that cause countless effects such as sterility, seizures, auto-immune disorders, paralysis and death. The 2014 article The real agenda of the Gates Foundation describes some of this:

“the trials [for the 2010 Gates malarai vaccine given to 7 African countries] resulted in 151 deaths and caused “serious adverse effects” (e.g., paralysis, seizures, febrile convulsions) in 1048 of 5949 children aged 5-17 months. Similar stories emerged in the wake of the Gates-funded MenAfriVac campaign in Chad, where unconfirmed reports alleged that 50 of 500 children forcibly vaccinated for meningitis later developed paralysis. Citing additional abuses, a South African newspaper declared: “We are guinea pigs for the drugmakers.”

It was in India, however, that the implications of BMGF’s collaboration with Big Pharma first rose to widespread public attention. In 2010 seven adolescent tribal girls in Gujarat and Andhra Pradesh died after receiving injections of HPV (Human Papilloma Virus) vaccines as part of a large-scale “demonstrational study” funded by the Gates Foundation and administered by PATH. The vaccines, developed by GSK and Merck, were given to approximately 23,000 girls between 10 and 14 years of age, ostensibly to guard against cervical cancers they might develop in old age. Extrapolating from trial data, Indian physicians later estimated that at least 1,200 girls experienced severe side effects or developed auto-immune disorders as a result of the injections.”

“In a recent interview Bill Gates briefly strayed off-message to warn of “huge population growth in places where we don’t want it, like Yemen and Pakistan and parts of Africa.” His use of the majestic plural here is revealing: in spite of much rhetoric about “empowering poor people,” the Foundation is fundamentally concerned with reshaping societies in the context of ruling-class imperatives.” 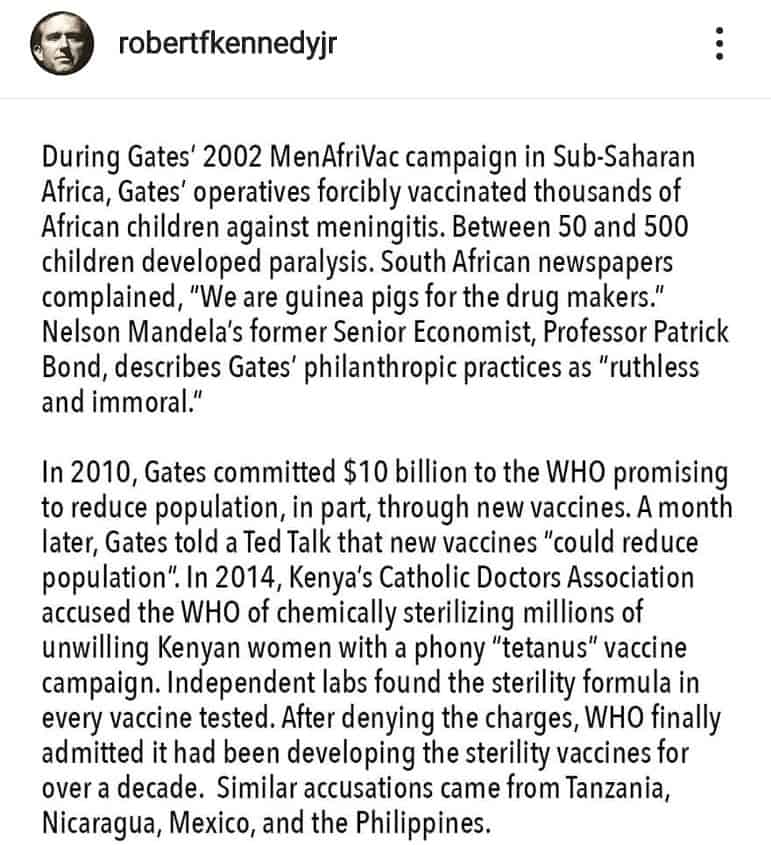 Like the Rockefeller family for over a century, Gates is interested in philanthropy with efficiency, i.e. it’s not really about philanthropy at all but rather control, control and control. It’s not about helping or empowering people; it’s about destroying people and transforming societies.

Gates openly warns about and predicts a coming pandemic that would kill 30 million people while secretly planning for it. Meanwhile, his foundation (The Bill and Melinda Gates Foundation) becomes the 2nd biggest funder of the Rockefeller WHO (World Health Organization). Gates struts around the WHO and, as one attendee shared, is treated like a Head of State at both the WHO and G20. Then, he funds various organizations like Pirbright and Inovio who gain patents for exotic vaccines (as explained in my earlier article The Coronavirus 5G Connection and Coverup) in advance before Gates’ planned pandemics strike. He has also invested in a Chinese pharmaceutical research company called WuXi AppTec which just happens to be located in Wuhan (yet another coincidence in a long line of coincidences surroudning this coronavirus crisis). WuXi AppTec’s mission and vision as stated on their website is to provide “a broad portfolio of R&D and manufacturing services that enable companies in the pharmaceutical, biotech and medical device industries worldwide to advance discoveries and deliver groundbreaking treatments to patients. With industry-leading capabilities such as R&D and manufacturing for small molecule drugs, cell and gene therapies, and testing for medical devices, WuXi AppTec’s [aims] to realize our vision that “every drug can be made and every disease can be treated”.” Think about that in terms of what is to come with vaccine-delivered nanochips.

Then, Gates organizes the Event 201 Simulation which just happens to plan for a coronavirus outbreak. Bill Gates-Netflix propaganda (the Netflix Explained series episode titled The Next Pandemic) reinforce the programming. Next, once his chaos has been unleashed, he positions himself as the savior by doing the rounds on MSM (TV and print), getting a wide platform to spread his views, which are nothing more than the NWO agenda for mass mandatory vaccination and human microchipping (ID2020 and digital certificates). Gates’ wealthy “philanthropic” foundation funds the home testing kit whereby you send a swab of your DNA to the lab (which he also funds) to see if you have the coronavirus (the same one that hasn’t been conclusively proven to exist as covered in my previous article). So Gates is now inducing millions of people to be tested for a vague virus and by doing so unwittingly surrender their DNA which will furthers the agenda of mass DNA collection. Finally, he is now revealing his plan to coerce people into (what will be a very unpopular) mass vaccinations by implying that you won’t be able to gather or move around freely unless you submit to the toxic vax chemical cocktails courtesy of Big Pharma.

Why has Bill Gates not been arrested and charged? 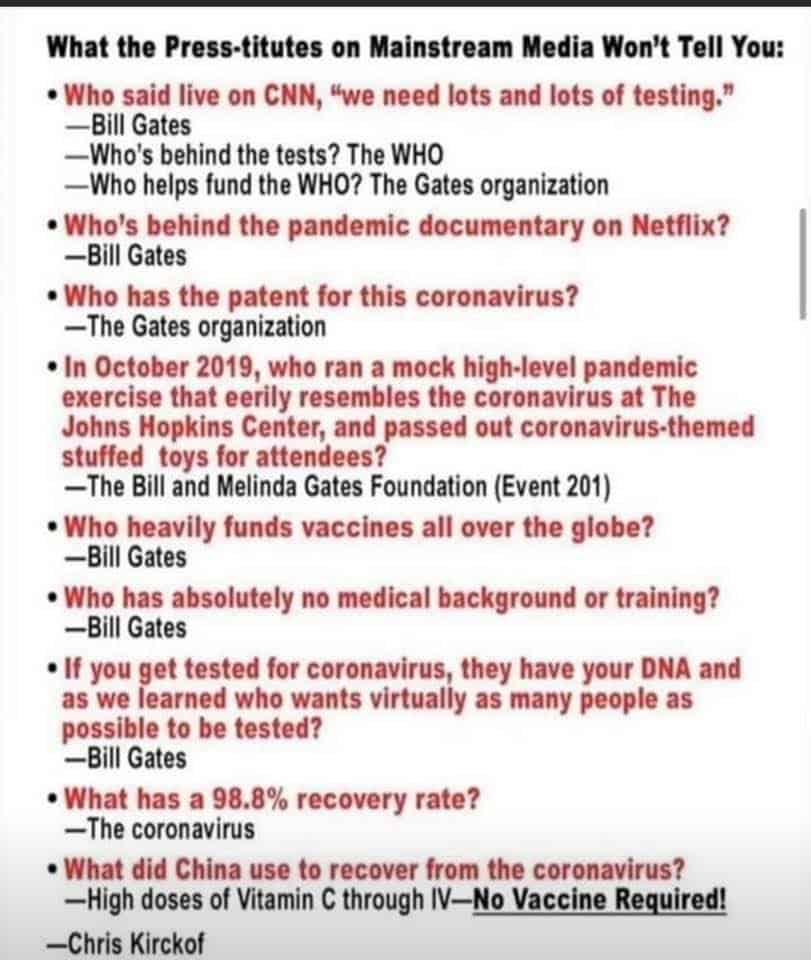 Final Thoughts: Now is the Time More Than Ever to Get Informed and Stand Up

The time has come for people to push back against the lockdown tyranny. How much longer are we going to take this? Are we going to allow authorities to boss us around, restrict our freedom, trash the economy, destroy small businesses and throw people into poverty via fearmongering over an invisible virus?

Where is the self-respect and the righteous anger that can be chanelled into positive acitvism to rise up against this tyranny based on a giant scam? Where is the spirit of the warrior who protects and defends what his sacred – her family, her friends, his loved ones and his ideals of truth, freedom, peace and justice? Where is the peaceful yet resolute and determined uprising, that we’re not going to take this any more? Why are people allowing a tiny minority to tell us whether we may or may not touch, gather and get together?

The world needs all of us to embody that warrior spirit, and it needs it NOW.