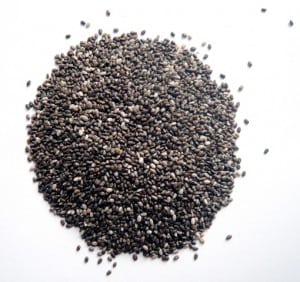 Chia seeds (above) and hemp seeds counter the omega 3 deficiency which has been connected to autism and autism spectrum disorders, and show potential to be an autism cure.

as the autism rate in the US and across the world continues to climb. While the exact causes of autism are still being researched (with Big Pharma vaccines already being a confirmed suspect), scientific studies are now bringing to light a new connection between autism and omega 3 fatty acid deficiency. Yasmin Neggers, professor of human nutrition, conducted a matched case control study in Korea, comprised of 29 autistic boys, who ranged in age from 8 to 11 years old (as well as a control group of 29 comparably healthy boys). She measured the children’s total cholesterol, high-density cholesterol, low density lipoprotein, LDL/HDL ratio, total fatty acid concentrations, as well as their omega 3 and omega 6 fatty acid levels.

Remarkably, the study showed that autistic children had much lower omega 3 levels compared to healthy children, especially levels of DHA (docosahexaenoic acid). Not only that, but the autistic children also had a significantly lower ratio of omega 3 to omega 6 fatty acids than the healthy children. Thus, it was discovered that autistic children exhibited an omega 3 deficiency – which makes sense, because it is exactly these omega 3 fatty acids which build nerve and brain tissues, and affect motor coordination. The professor concluded that omega 3 fatty acid deficiency is now a strong predictor of autism, and she is not the only one – there have numerous other randomized, double blind, placebo-controlled clinical trials which came to the same conclusion.

If you’re looking for a natural cure for autism (or Asberger’s or any of the autism spectrum disorders), forget side effect-laden Big Pharma drugs and look instead to Mother Nature and her array of super foods. There are two remarkable and outstanding sources of omega 3 fatty acids that could be an autism cure solution. Chia seeds are an exceptionally high source of easily digestible omega 3 fatty acids, as well as being a powerhouse of nutrition, very high in minerals and boasting an almost the complete protein spectrum (19 out of 22 amino acids). Hemp seeds are another phenomenal source of omega 3 fatty acids, as well as containing the ideal ratio of omega 6 to omega 3 (3:1), something which virtually no other food does. Together, taken on a daily basis, super food chia and hemp seeds can counter any omega 3 deficiencies, build healthy nerve and brain tissue, and restore the body’s correct and optimal balance of omega 3 and omega 6 fatty acids.

Chia and hemp may the best natural way to deal with autism until more research is done. It is too early to say if they could become an autism cure, but if I were a parent of an autistic child, I would certainly give them a go. Super foods have been known to cure many diseases, including cancer, that Western Medicine has falsely stated were incurable.

Previous Article
Federal Income Tax Only Pays Off Debt and Does Not Contribute to Governmental Services for its Citizenry
Next Article
Psychiatric Drugs and Mass Shootings: The Definitive Connection