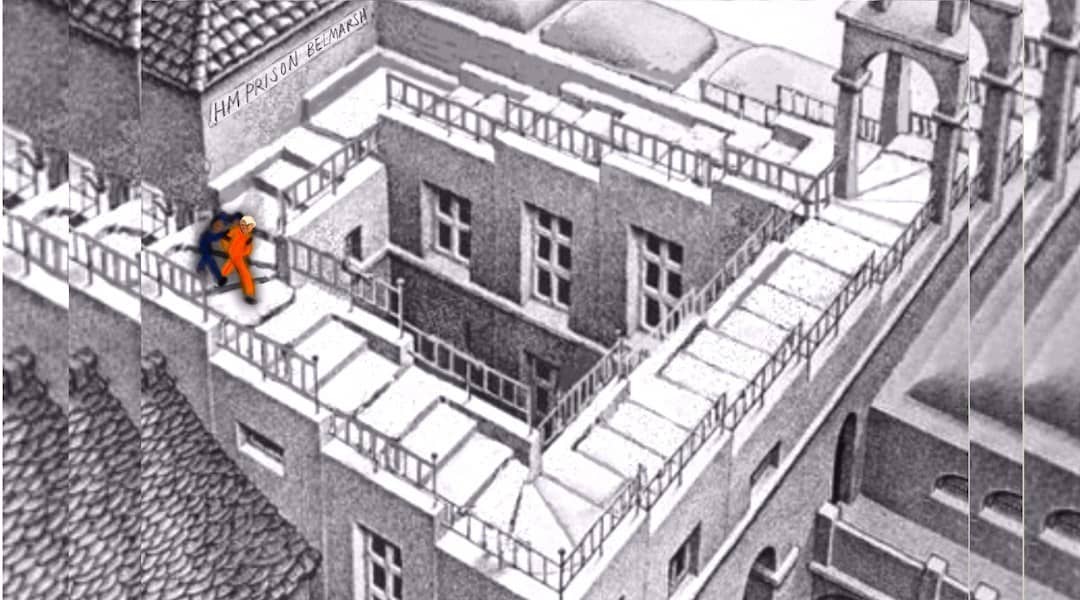 A phase of the Assange Trial has finished after 4 days, revealing itself to be a self-contradictory Kafkaesque nightmare. The prosecution has used the US-UK Extradition Treaty as the basis for its claim and charge, but wants to pick and choose which provisions apply – an absurdity.

The Assange trial has paused for now.

The first week of the Julian Assange extradition trial has concluded, to be resumed on May 18th. If you haven’t been following the proceedings closely, let me sum up what you missed.

The prosecution is working to extradite Assange to the US under a US-UK extradition treaty, a treaty whose contents the prosecution now says we should ignore because they explicitly forbid political extraditions. The prosecution says it doesn’t matter anyway because Assange is not a political actor, yet in 2010 the US government that’s trying to extradite him labeled him a political actor in those exact words. Assange’s trial is taking place in a maximum security prison for dangerous violent offenders because that’s where he’s being jailed for no stated reason and despite having no history of violence, which means he’s kept separate from the courtroom in a sound-resistant safety enclosure where he can’t hear or participate in his own trial. The magistrate judging the case says he can’t be allowed out of the enclosure since he’s considered dangerous, because he’s been arbitrarily placed in a prison for dangerous violent offenders. The magistrate keeps telling Assange to stop speaking up during his trial and to speak through his lawyers, yet he’s being actively prevented from communicating with his lawyers.

Not even a tiny bit?

A British human rights and law reform organisation found that keeping a defendant locked in a sound-resistant glass cage apart from the courtroom, as they're doing to Assange currently, necessarily breaches their right to a fair trial. https://t.co/FG61rIu1ur

It’s common in British courtrooms to have something called a “dock”, a place where defendants sit separately from court proceedings. Not all UK courtrooms have docks, and not all docks are the “secure” glass cabinet type which Assange is kept in; they can also be open wooden enclosures. Because Assange is being kept without explanation in a maximum security prison normally reserved the most dangerous violent offenders and terrorism convicts, his trial is taking place in a cage that is very much the “secure” type (so much so that he’s been complaining that he can’t hear the proceedings in his own trial through the bulletproof glass), and there is an expectation that he remain there. The magistrate has ruled that this nonviolent offender shall be kept in his sound-resistant enclosure throughout the duration of his trial, bizarrely asserting that Assange poses a danger to the public.

Former UK ambassador and longtime Assange supporter Craig Murray was at court all four days of the trial, and he described the situation as follows (Edward Fitzgerald is Assange’s defense attorney, Vanessa Baraitser is the magistrate):

On return, Edward Fitzgerald made a formal application for Julian to be allowed to sit beside his lawyers in the court. Julian was “a gentle, intellectual man” and not a terrorist. Baraitser replied that releasing Assange from the dock into the body of the court would mean he was released from custody. To achieve that would require an application for bail.

Again, the prosecution counsel James Lewis intervened on the side of the defence to try to make Julian’s treatment less extreme. He was not, he suggested diffidently, quite sure that it was correct that it required bail for Julian to be in the body of the court, or that being in the body of the court accompanied by security officers meant that a prisoner was no longer in custody. Prisoners, even the most dangerous of terrorists, gave evidence from the witness box in the body of the court nest to the lawyers and magistrate. In the High Court prisoners frequently sat with their lawyers in extradition hearings, in extreme cases of violent criminals handcuffed to a security officer.

Baraitser replied that Assange might pose a danger to the public. It was a question of health and safety.

Ah yes, yes I’m sure everyone at the courtroom is very concerned that the emaciated computer nerd might at any moment go full beast mode and start throwing them all across the room. Sure thing, Vanessa.

Does that make sense to you?

Your Man in the Public Gallery – The Assange Hearing Day 3 – In yesterday's proceedings in court, the prosecution adopted arguments so stark and apparently unreasonable I have been fretting on how to write them up in a way that does not seem like https://t.co/Fd56lIUVcM

In the same report Murray also says Assange was forbidden from passing notes to his lawyers, yet when he tried to speak up during his trial to get someone’s attention Baraitser told him he may only speak through his lawyers. Even when they let him, Shadowproof‘s Kevin Gosztola also reports that the defense has complained that they can’t even see when he wishes to communicate something with them, because his dock is behind them in the courtroom.

Assange then stood up in the dock and said, “The problem is I’m not able to get representation.” Judge Baraitser then told him to “keep quiet and speak through his lawyers.” He replied, “That’s the problem, I can’t.”

Assange has also complained that even when he is both able and permitted to speak to his lawyers during the trial, he’s unable to do so in private, saying, “I cannot communicate with my lawyers or ask them for clarifications without the other side seeing” and “The other side has about 100 times more contact with their lawyers per day.”

“I am as much a participant in these proceedings as a spectator at Wimbledon,” a frustrated Assange complained at one point.

It’s pretty clear by the way Baraitser is even more biased against Assange than the actual prosecutors that she made up her mind how she’s going to rule long before the trial even began. This is made all the more shady by the fact that there are apparently no photographs of this public official anywhere online, and indeed no documentation of her existence outside of the court.

“Ms Baraitser is not fond of photography – she appears to be the only public figure in Western Europe with no photo on the internet,” wrote Murray after noting her anger at someone photographing the courtroom. “Indeed the average proprietor of a rural car wash has left more evidence of their existence and life history on the internet than Vanessa Baraitser. Which is no crime on her part, but I suspect the expunging is not achieved without considerable effort. Somebody suggested to me she might be a hologram, but I think not. Holograms have more empathy.”

This by itself is weird. How is someone with no public face ruling on an extradition trial of such immense historical significance? How is a public official allowed to make a decision which will affect every member of the public in one way or another, yet the public is not allowed to know anything about her or what she even looks like? That, in my opinion, is weird and creepy.

It’s interesting. I have done some research. Baraister does not exist outside of court. Nothing. https://t.co/R0YksHkfbR

Then there’s the prosecution. They’re trying to argue that the US-UK extradition treaty which expressly forbids extradition for political offenses is void and inapplicable to this case because of another law called the Extradition Act which is written differently, despite the fact that the extradition treatyformed the basis for Assange’s extradition request in the first place.

“We’re in a pretty strange Alice in Wonderland world where the treaty that controls and gives rise to the request, supposedly has nothing to do with the legality of it, it’s very strange,” Fitzgerald said at one point, adding: “it is generally accepted worldwide that people should not be extradited for a non-violent offense of a political nature.”

The prosecution also attempted to argue that even if the exemptions in the extradition treaty did apply, it wouldn’t matter because Assange is not accused of anything that could be called a political offense. They said the defense must “equate what Mr Assange is alleged to have done against whether or not the only purpose was to change the government in America or induce America to change its policy, both of which we say it’s not.”

The defense correctly countered that not only was WikiLeaks trying to affect US government behavior, but that they actually succeeded in doing so. Not only that, but the US government has itself accused Assange of being a political actor who is trying to change America’s behavior.

“He’s not a journalist. He’s not a whistleblower. He is a political actor. He has a political agenda,” State Department spokesman PJ Crowley said of Assange in 2010 after WikiLeaks began exposing US war crimes. “He is trying to undermine the international system that enables us to cooperate and collaborate with other governments and to work in in multilateral settings and on a bilateral basis to help solve regional and international issues.”

In other words, Assange is a political actor who is deliberately trying to interfere with the US government agenda of world domination.

The Merriam-Webster dictionary defines the word Kafkaesque as “of, relating to, or suggestive of Franz Kafka or his writings, especially: having a nightmarishly complex, bizarre, or illogical quality.”

“Kafka’s work is characterized by nightmarish settings in which characters are crushed by nonsensical, blind authority,” says Merriam-Webster. “Thus, the word Kafkaesque is often applied to bizarre and impersonal administrative situations where the individual feels powerless to understand or control what is happening.”

I generally try to avoid words that not everyone will understand in my writings, especially in my headlines, but, you know, damn. That’s the most perfect definition of this ridiculous bootlicking bureaucratic nightmare maze that you could possibly come up with.

We can expect more of this when the trial resumes in May, and, to be clear, this is the more just and equitable half of the fight. If Assange is successfully extradited to the United States as the mysterious Vanessa Baraitser seems primed to allow, he will face a rigged trial after he and his legal team were spied on by US intelligence agencies when preparing his defense. He and his legal team will be completely silenced from commentary on the trial, and he’ll disappear into a black hole of “Special Administrative Measures” where he won’t be heard from again.

The time to speak up for Assange and the future of press freedoms is now. Not when he’s extradited. Not after his fake trial and draconian sentencing. Now.

Previous Article
Freedom of the Press on Trial: 10 Reasons Why Assange is Lawfully in the Right
Next Article
1983 CIA Document Reveals Plan To Destroy Syria, Foreshadows Current Crisis