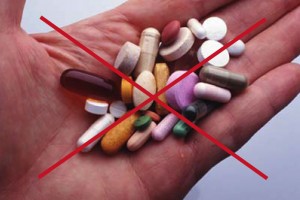 Antibiotics overuse could end in disaster, by creating a super-bug which can’t be destroyed. Many people have also reported serious side effects after taking antibiotics – which is not surprising, since they are made of synthetic ingredients.

of a “super-bug” – a bacterium or group of bacteria that has developed resistance to all known antibiotics and against which there is no known defense. Drug-resistant bacterial strains are growing worldwide, such as this strain of TB (tuberculosis) as reported by this study in the Lancet. The issue is that a dose of antibiotics is the easy solution (too easy) to any bacterial disease. It may be warranted in extreme cases, but in general Western doctors have lapsed into overprescribing them, possibly out of laziness, possibly out of ignorance and possibly out of bribery (Western doctors are routinely bribed by Big Pharma reps and given kickbacks to prescribe certain drugs). Far too often, using antibiotics is like using a sledge hammer to kill a mosquito, and as the saying goes, “if the only tool you have is a hammer, you tend to see all problems as nails.” Antibiotics wipe out all bacteria, good or bad, and destroy delicate balance of a body’s ecosystem.

Allopathy is Based on Reductionist not Holistic Thinking

Allopathy (Western medicine) does not train its doctors to look at the body as holistically as other medical traditions do, such as Chinese medicine, naturopathy or homeopathy. It does not recognize the existence of prana, chi, ki, mana or the meridians that govern the flow of energy throughout the body and determine the state of health one enjoys. Western doctors (in general) are quite content to prescribe a drug which may solve a problem in part of the body, but contain side-effects which later manifest as disease in another part of the body. They then prescribe more drugs for that, and the cycle continues on and on, like a dog chasing its tail, with the initial imbalance simply moving to another part of the body and transforming into another disease.

True health is a state of complete balance. The idea of “killing” a disease in one part of the body, only to have it resurface in another, is absolutely ludicrous to any true healer. What is the point of merely kicking the can down the road as antibiotics overuse does? And yet, due to the Rockefeller’s insidious influence, Western Medicine has formed an unholy alliance with Big Pharma, and the two have become so intertwined that now patients have become customers – and a patient healed is a customer lost to the giant pharmaceutical cartel.

Antibiotics Overuse: The Beginning of the End of Allopathy?

David Stewart declares that we may be witnessing the end of allopathy as we know it. He states that “sooner or later, all synthetic drugs and antibiotics (will) become ineffective or lethal and have to be discontinued … patented medicines are all unnatural, composed of molecules never before existing on planet earth. Our bodies were not made to utilize, metabolize, and eliminate such substances. This is why all pharmaceuticals, without exception, have negative side effects.” He also indicates that allopathic drugs, including all antibiotics and synthetic pharmaceuticals, are already starting to become so ineffective and obsolete that drug companies will have to engage in endless research just to keep ahead of the curve – and there may be a limit to how long they can do this. Such is the flawed paradigm of allopathic synthetic drugs.

Will a Super-Bug Arise from Antibiotics Overuse?

Antibiotics overuse is a serious problem, not just because it may lead to the rise of a super-bug, but also due to fact that antibiotic drugs are toxic in and of themselves. The article Exposing the hidden epidemic of crippling, painful neurological adverse effects of antibiotics highlighted the fact that there are countless injuries and side-effects caused by antibiotics, just as with vaccines, but with the difference being that vaccine victims have a support network, whereas antibiotic victims do not. The common fluoroquinolone antibiotics are popular, but the side effects are grave, ranging from the tearing of tendons, the crippling losses of motor abilities, difficulty thinking, tinnitus, anxiety, chronic insomnia and depression.

Antibiotic Overuse and Overprescription is Rife

Think carefully before taking antibiotic drugs. Antibiotic overuse is rife. If you do need to, make sure you balance your system by taking probiotics for many weeks afterwards, as well as eating healthy fermented foods such as raw miso, sauerkraut and kefir, to help restore the healthy intestinal flora in your digestive tract.