9/11 Was an Inside Job says former German Defense Minister

9/11 Was an Inside Job says former German Defense Minister 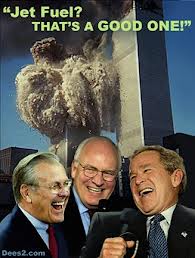 9/11 was an Inside Job: jet fuel (refined kerosene) can’t burn higher than 825°C, yet the Twin Towers were made of steel which has a burning point of 1510°C

says former German Defense Minister and Member of Parliament Andreas von Bülow, who points out that the event was planned in part by PNAC (Project for a New American Century), a group of belligerent neocons (neo-conservatives) wanting to use America’s military might to dominate the world. Mr. von Bülow further stated that Western Governments need a continuous state of war to keep their power (just as George Orwell wrote about in 1984), and often resort to false flag incidents – staging a terror attack and blaming it on an innocent scapegoat or contrived patsy who bears the brunt of the blame. Hitler’s Reichstag fire in 1933, the Gulf of Tonkin incident in 1964 and the attack on the USS Liberty in 1967 were all false flag staged terror events to advance the agenda of those who orchestrated them behind the scenes.

In the case of 9/11, the bogeyman was Osama Bin Laden. Prior to 9/11, the consolidated mainstream media had been slowly conditioning the American public to be scared of Muslims. After the attack on the Twin Towers, the islamophobia kicked into high gear as the Controllers used the fear, panic and heightened emotions of an entire nation to bulldoze The Patriot Act through Congress, legally stripping many fundamental rights of ordinary Americans that were supposed to be inviolable according to the Constitution and Bill of Rights, such as the 4th Amendment which states that “The right of the people to be secure in their persons, houses, papers, and effects, against unreasonable searches and seizures, shall not be violated, and no Warrants shall issue, but upon probable cause, supported by Oath or affirmation, and particularly describing the place to be searched, and the persons or things to be seized.” Since the Patriot Act became law in 2001, numerous programs including warrantless wiretapping have been used to spy on ordinary Americans, Big Brother style, courtesy of the extremely secretive NSA (National Security Agency).

The world and the US changed forever on 9/11. What a pity that most don’t even question the bogus official story. The truth is the 9/11 was an inside job. Research it for yourself.