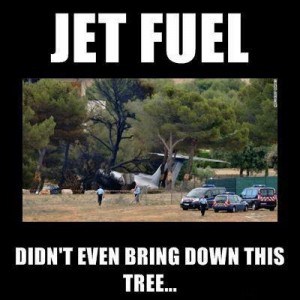 A key part of the 9/11 inside job evidence is the jet fuel.

The “official” 9/11 explanation (an absurd cover story concocted by the US Government) attributes the collapse of the World Trade Center Twin Towers to the presence of jet fuel from the planes that crashed into the towers. Yet there is a serious problem of physics here: jet fuel (refined kerosene) can’t burn higher than around 825°C, yet the Twin Towers were made of steel which has a burning point of around 1500°C. Some researchers even calculate that the jet fuel would only have added around 250°C to the overall temperature. So how could jet fuel have possibly caused the collapse of steel-reinforced buildings?

This brings us to the evidence, which is dynamite, so to speak. There were explosives in the buildings! Consider the following:

1. Several firemen reported hearing explosives in the building. The janitor in the basement William Rodriguez (featured in the clip above) has said that he heard an explosion or rumble that he sure was not caused by gas in the kitchen. There were explosives planted in the elevator? Who planted them and why?

2. The explosive material nano thermite was found in the debris – see Professor Steven Jones’s presentation “9/11 Revisited” on DVD for stunning evidence and analysis.

3. Marvin P. Bush, younger brother of George W. Bush who was president at the time, was a principal in a company called Securacom that provided security for the World Trade Center. Just a coincidence? The film Loose Change alleges there were eyewitness accounts of strange men going to floors on the WTC buildings people don’t normally go to, just 1-2 weeks before 9/11 occurred. Were explosives being implanted on all floors so the building would properly crumble?

The 9/11 inside job truth must be told. Jet fuel simply could not have taken down the buildings. It was planted bombs, causing explosions – a controlled demolition.

Previous Article
The Zionist Delusion: Zionist Jews are the “Chosen Ones” and Everyone Else is Less Worthy
Next Article
Vatican Scandals Never End: “Vatileaks” Reveals Internal Power Plays, Corruption in Catholic Church Hierarchy