9/11 13th Anniversary: 13 Questions for the Government

9/11 13th Anniversary: 13 Questions for the Government 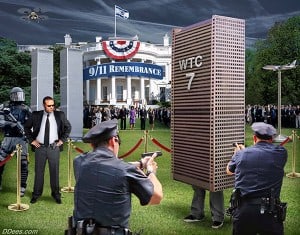 On this 9/11 13th Anniversary, let’s awaken to the truth of 9/11. These 13 questions for the US Government highlight the deception of the official story.

it is worth casting our attention back to that horrific event, and continuing to shine light on the utter nonsense that is the official story of 9/11. Although it is now 2014 and the 9/11 13th anniversary, there are some promising signs that people are beginning to awaken to the truth of the biggest false flag operation ever on US soil. Recently the TV channel C-SPAN (which reaches around 100 million cable and satellite households in America) hosted a show with Richard Gage, founder of “Architects and Engineers for 9/11 Truth”; and the organization ReThink 9/11 is displaying a massive digital billboard in New York City showing life-size video footage of WTC 7’s symmetrical destruction.

How did a giant, whole steel-and-concrete building (WTC 7) fall in on inself in perfect, controlled-demolition fashion, when it was not hit by any plane?

Many people still do not realize that an entire building collapsed on 9/11 that was never hit by a plane. Building 7 or WTC7 fell around 5pm that day in a neat, pancake-like fashion. Around 2000 of architects and engineers (Architects and Engineers for 9/11 Truth) have gone on the record to state that NIST’s “office fire” theory defies the laws of physics and could not have caused the fall. They claim that the fall exactly resembled a controlled demolition.

How did the Twin Towers collapse so perfectly?

An analysis of the collapse of the twin towers shows that their destruction proceeded through the path of greatest resistance at nearly free-fall acceleration, that there was an improbable symmetry of debris distribution, and an extremely rapid onset of destruction. How can the laws of physics as we know them explain this? Could this fall ever be replicated?

If planes really downed the WTC, why were traces of the explosive nano-thermite found in the debris?

Why, as affirmed by eyewitnesses, were there bombs in the buildings?

Why did eyewitness firefighters on the scene say they heard bombs in the building, especially in the basement and on the lower levels? Why do office workers say the lobby was blown up if the planes hit the towers above the 50th floors?

What about first responder testimony?

Why does first responder William Rodriguez swear he saw, felt, experienced and heard bombs in the basement when he rescued people?

Why did Larry Silverstein say “pull it!”?

If 9/11 wasn’t planned, why did owner of the towers Larry Silverstein take out insurance a few months beforehand for the very type of event that happened? Why did he say “pull it!” (a slang reference meaning to begin a controlled demolition)?

How did the solid steel frames get turned to dust?

How did the building frames get pulverized? Was some kind of free energy weaponry used, based on free-energy Tesla/Hutchison technology?

Why did the Bushes trade and meet with the Bin Ladens?

If Bin Laden was such a scary terrorist, why did the Bush family trade with him for decades, including the sale of weapons? Why did representatives from both families meet the day before 9/11?

Why did some people have foreknowledge of the event?

If 9/11 was really carried out by 19 Arabs with boxcutters, and the US Government knew nothing, why was there foreknowledge of the event? Why did BBC report Building 7 had fallen 30 minutes before it actually did? Why did San Francisco mayor Willie Brown and author Salmon Rushdie both get calls beforehand telling them not to board planes going to NYC?

Why did NORAD stand down?

Why did NORAD, charged with the duty of defending American skies that day and in general, stand down at key times instead of scrambling fighter jets to intercept the planes? Why did Cheney give the order to stand down?

A convenient drill at same time: like other false flag operations, there was a war game drill on at the same time in the same place for the same scenario (hijacked planes going in the WTC) during 9/11, so key personnel were confused about what was mock and what was real. What are the chances of a real event exactly mimicking a drill just coincidentally happening to occur at the same time?

Why was the video footage doctored with fake planes?

Why did the Zionist mainstream media use CGIs (computer generated images) to insert fake airplanes into the video shot that could not possibly have been there?

Israel is the private country of the richest family in the world – the Rothschilds. Israel (and their military arm Mossad) has been behind many of the world’s atrocities ever since their founding in 1948. They have repeatedly attacked their neighbors and their friends alike (such as the Israeli false flag attack on the USS Liberty in 1967). They have bought, bribed and blackmailed US politicians for decades. There is evidence (courtesy of Jim Stone) they installed nuclear devices at Fukushima to trigger that the Fukushima disaster of 2011.

Why were Israelis (Mossad agents) arrested in NY on 911, filming, documenting and celebrating the event with foreknowledge? Why does the FBI have documents on Urban Moving Systems (the Israeli Mossad front)? Why were Israeli Mossad agents driving around New York on 9/11 with explosives, highlighted maps, fake passports, boxcutters and cash? Why did some Israelis admit on Live TV they were sent to document the attack? Why did ZIM, an Israeli shipping company 49% owned by the Israeli Government, vacate its 10,000 square-foot office in the north tower only days before 9/11 (by doing so, ZIM had to pay a $50,000 penalty for prematurely breaking its lease)?

Many, many, many questions …

Previous Article
Fluoride, Fluoride, Everywhere: Sources of and Remedies for this Ubiquitous Toxin
Next Article
9/11 was an Inside and Outside Job: Remembering the Israel 9/11 Role