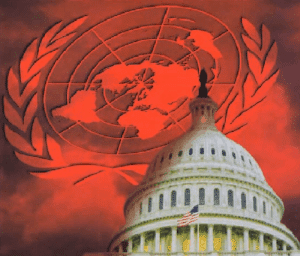 The upcoming 2015 UN Summit promises to contain yet more collectivism and fake buzzwords, continuing to use “sustainable development” to centralize power.

will be held in September 2015 in New York. Like any UN summit, it will be full of UN buzzwords such as consensus, empowerment, rule of law and sustainability, all of which are fake and have a sinister double meaning. The United Nations, founded by the Rockefellers and the CFR (Council on Foreign Relations), has always been, right from its inception, about creating a One World Government. It has achieved this by appearing to be “of the people” when “of the globalists” would be a more apt description. Later this year, it will attempting to adopt the “post-2015 development agenda” which will be a furthering of its Agenda 21 aims, such as grabbing national land under the guise of saving the environment, forcing people off their land into tiny apartments in Smart Cities, global gun control and global internet control (the latest of its power grabbing schemes).

Here are some of the items on the agenda at the 2015 UN Summit:

Sounds great and seems so noble if you don’t know the background to all this. However, when you pass the above points through the Orwellian translation unit, it means centralizing vast amounts of power into a body destined to become the World Government, under the pretext of fighting an imaginary manmade global warming or climate change. It also means extending the reach of the UN so that local bodies (local councils and municipalities that belong to ICLEI, the International Council for Local Environmental Initiatives) can implement its global directives and make it look grassroots or like it was locally decided.

The UN loves to boast about how it operates by consensus. However, it’s fake consensus, much like the nations of the West have fake democracy. There is no real democracy when all of the political candidates have the same view on key issues, and answer to the same force. Likewise, there is no real consensus when the direction and agenda have been decided in advance. It’s just a playing out of a discussion, cleverly guided by key agents to ensure the outcome is what the elite have secretly dictated beforehand. One way this happens at the UN is through the World Bank (a branch for the UN) which pays for people (from all corners of the globe) to come to events to give appearance of a global consensus of all the citizens of the world. However, a condition of them being funded is that they say what they are told to say. Rose Koire and others have also exposed the Delphi Technique, which is a way that meetings are cleverly manipulated by facilitators to guide the group towards an end goal, view or consensus, while making it appear the group arrived there organically.

When the UN talks about empowerment, it is not really talking about individual empowerment for you or I. That is just a pretext. The UN is seeking global power. It was set up to become higher and more powerful than national Governments. It is seeking the empowerment of itself. It wants an army or police force with which it can start to impose all its rules over every nation and person on Earth. There is already a UN “Peacekeeping” force – another Orwellian name for military soldiers. War is Peace. In a similar vein, the UN “Humanitarian Missions” are not called wars but are wars. They involve the attacking and bombing of innocent countries (including many civilians, women and children, such as happened in Libya) because UN leaders and “the international community” (i.e. the elite-controlled global consensus) has decided that they want more control over a particular area. The more that the UN empowers itself, the closer we step to a One World Military force.

The UN keeps invoking the “Rule of Law” mantra to convince people it has authority over them when it doesn’t. Interestingly, this is exactly the phrase used by George Bush Sr. on September 11th, 1991, when he publicly pushed for a New World Order. The UN keeps arrogantly proceeding with its “Rule of Law” idea, however the basic rule of treaty law is that a treaty is only binding on the signatories, and the UN is still trying to impose the ICC (International Criminal Court) upon all countries, even those who have not signed on to it. This is based upon the arbitrary number of “60” countries that ratified it. It all stems from the false belief that UN Charter trumps the US Constitution.

The 2015 UN Summit agenda includes “effective, accountable and inclusive institutions to achieve sustainable development”. Sustainability and sustainable development are clever pretexts for centralization of power. This stems from the decision made decades ago by the elite to use the threat of pollution and environmental catastrophe, or the threat of humanity itself, as the cover for a worldwide power grab. Consider the excerpt below from the Report from the Iron Mountain:

“It may be, for instance, that gross pollution of the environment can eventually replace the possibility of mass destruction by nuclear weapons as the principal apparent threat to the survival of the species. Poisoning of the air, and of the principal sources of food and water supply, is already well advanced, and at first glance would seem promising in this respect; it constitutes a threat that can be dealt with only through social organization and political power.”

Consider also this excerpt from the Club of Rome’s 1991 document entitled The First Global Revolution:

“In searching for a common enemy against whom we can unite, we came up with the idea that pollution, the threat of global warming, water shortages, famine and the like, would fit the bill. In their totality and their interactions these phenomena do constitute a common threat which must be confronted by everyone together … all these dangers are caused by human intervention in natural processes, and it is only through changed attitudes and behavior that they can be overcome. The real enemy then is humanity itself.”

The Entire Foundation of the United Nations …

Underpinning all the marketing buzzwords of the United Nations, and underpinning the entire foundation of the United Nations itself, is the same insidious ideology behind many famous “isms”. It’s the same ideology behind fascism, socialism and communism. It’s called collectivism – and it doesn’t matter whether you’re left or right (a false dichotomy anyway since both sides are controlled by the same force), because collectivist thinking controls all parts of the current political spectrum across the world.

Collectivism is the idea that the group is more important than the individual, that the State is everything, that only the State grants human rights and that there should be no private property. Collectivism is total anathema to individual freedom and rights, and everything upon which the American Republic was founded. No one has exposed this better than G. Edward Griffin, whose speeches and books are worth close attention.

The elite controllers promoting collectivism are trying to achieve, though the UN, one of the finest pieces of brainwashing ever attempted: to convince you that all your rights are granted by Government – and therefore that Government (i.e. the elite at the top) may take them all away if it deems so. Such a balance of power is inherently tyrannical. To deny that humans are born with or come to Earth with intrinsic rights is to deny the basic worthiness of a person – and to set up a situation where they can become enslaved later on in life.

(As an aside, one of the 3 most notorious conspiracy documents ever written, in my opinion, was The Protocols of the Learned Elders of Zion. Towards the end of the document the writers admit that the World Government they are trying to install is collectivist.)

Below is a quote from the official UN Charter:

And which members comprise the UN Security Council? There are 5 permanent members (US, Britain, France, Russia and China), all of whom have historically had governments which have experimented upon, tortured, killed and committed genocide against their own citizens, and citizens from other countries.

As Edward Griffin write in his book The Fearful Master: A Second Look at the United Nations:

” … the UN assumes that the Charter is vague and broad enough so as to authorize it to do absolutely everything! This concept of unlimited power was made absolutely clear when the UN World Court declared: “Under international law, the organization [the UN] must be deemed to have those powers which, though not expressly provided in the Charter, are conferred upon it by necessary implication as being essential to the performance of its duties.” “

There you have it. The collectivist foundation of the UN has always been in diametric opposition to the individualistic foundation of the US. The UN was set up to be able to administer and oversee (i.e. control) everything from your state of health to your housing. The US Federal Government was set up with strict limits on how much it could do (especially in the 9th and 10th Amendments of the Bill of Rights).

As the 2015 UN Summit draw closer, it would be well worth revisiting what kind of world we want to live in, before it is overtaken by a collectivist New World Order.