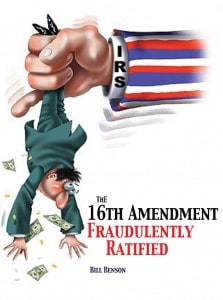 Evidence shows that the 16th Amendment was never actually ratified, only fraudulently declared so. This means the US Government has no lawful basis to levy an Income Tax against Americans!

as the research of Bill Benson shows, who went from State to State gathering evidence and ended up with irrefutable proof. As the DVD “16th Amendment Fraudulently Ratified” tells, Benson collected undeniable evidence in the form of thousands of certified legal documents from both state and federal archives. These documents revealed exactly how the 16th Amendment was acted on by each state legislature, and how it was handled by the office of the Secretary of State for the United States. A careful reading of these documents showed that the then Secretary of State, Philander Knox, decided to fraudulently declare the 16th Amendment officially ratified, despite the fact it did not have the requisite number (36 which was three quarters of the existing 48 States at that time) of state legislature approvals. When his project was finished at the end of 1984, Bill had visited the capitol of every state from 1913 and knew that not a single one had actually and legally ratified the proposal to amend the U.S. Constitution!

This is the danger of unchecked Big Government; it makes up its own rules and does not follow the law or even its own guidelines, if it does not suit the agenda of the tyrants running it at the time. The fraudulent declaration of ratification occurred during the final days of the William Howard Taft administration in 1913. Interestingly enough, in that very same year of 1913, another disastrous blow was struck against the sovereignty of America and Americans: the privately-owned (by the Rothschilds, Morgans and other elite banking families) Federal Reserve was given its charter and the power to mint currency, this time under the Woodrow Wilson administration. Wilson was duped into supporting this bill, but later came to deeply regret what he had done; he said, “I am a most unhappy man. I have unwittingly ruined my country. A great industrial nation is controlled by its system of credit. Our system of credit is concentrated. The growth of the nation, therefore, and all our activities are in the hands of a few men. We have come to be one of the worst ruled, one of the most completely controlled and dominated Governments in the civilized, world no longer a Government by free opinion, no longer a Government by conviction and the vote of the majority, but a Government by the opinion and duress of a small group of dominant men.”

Returning to the issue of the 16th Amendment, Benson’s research is crucial, because it destroys the foundations of the Government’s supposed authority. Ever since 1913, the US Government has used the 16th Amendment as its sole authority to tax an individual’s wages and salaries, via the Federal Income Tax collected by the IRS. (The IRS, by the way, is another giant fraud perpetrated upon the American people. It is not an official agency or even part of the US Government at all! It is a private Puerto Rican trust.) So by falsely claiming the legitimacy of the 16th Amendment, the US Government began to unlawfully extract taxes from individuals, directly, without apportioning it among the States or basing it on Census results. Up until 1913, the Government followed the Constitution, which specifically states in Article 1, Section 2 that “direct Taxes shall be apportioned among the several States which may be included within this Union.”

1. The federal income tax is a direct tax; and

2. Direct taxes have to be apportioned among the States, according to the US Constitution, Article 1, Section 2.

Next time tax season comes around, think carefully about whether you want to participate in this scam any longer. You are completely within your rights to refuse filing or paying income tax. Indeed, lawfully refusing to do so may be one of the most effective ways to bring this tyrannical, cancerous Government to its knees, and restore it to its rightful function: as the servant not the master of the We the People.